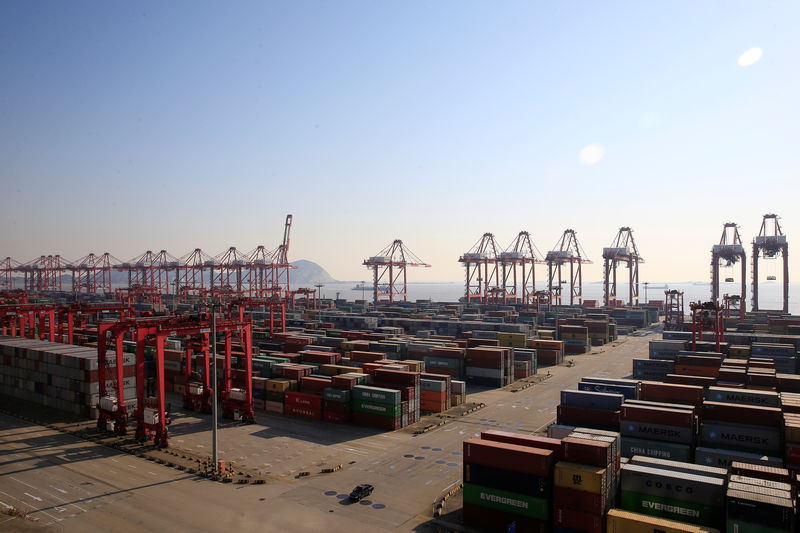 © Reuters. Containers are seen at the Yangshan Deep Water Port, part of the Shanghai Free Trade Zone, in Shanghai

Exports are one of China’s key growth drivers, and a loss of momentum will pile more pressure on its already cooling economy and global trade.

Analysts polled by Reuters had forecast shipments from the world’s largest exporter would rise 10.1 percent in August from a year earlier, slowing only slightly from 12.2 percent in July.

China posted a smaller trade surplus of $27.91 billion for the month. Analysts had expected the surplus would rise to $31.79 billion from $28.05 billion in July.

The world’s largest trading nation got off to a strong start this year, but its economic outlook is being clouded by the rapidly escalating U.S. trade dispute and cooling domestic demand.

President Donald Trump said last week he is prepared to quickly ramp up the trade war and is expected to impose duties on another $200 billion of Chinese imports soon. Beijing has vowed to retaliate.

Trump warned on Friday he was ready to slap tariffs on virtually all Chinese imports into the United States, threatening duties on another $267 billion of goods on top of $200 billion.

China’s export data has been surprising resilient to several rounds of tit-for-tat tariffs so far, possibly as companies ramped up shipments before stiffer U.S. duties go into effect, but factory surveys have shown export orders have been shrinking for several months.