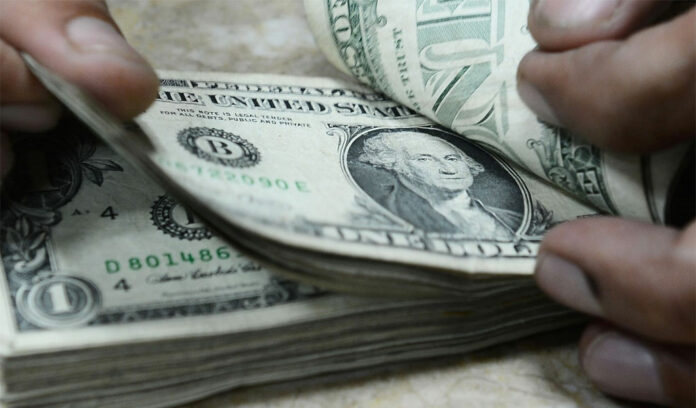 NEW YORK: The US dollar rose against a basket of other currencies on Friday, as US job growth surged in August, but investor concerns about a possible escalation of the US-Chinese trade conflict held gains in check.

Strengthening wage growth underscores tight labor market conditions and cements the likelihood of a third interest rate increase from the Federal Reserve this year when policymakers meet on Sept. 25-26.

“This is a solid report. It reinforced the view that the Fed will raise rates at the next meeting,” said Mark Zandi, chief economist, Moody’s Analytics, in West Chester, Pennsylvania.

US benchmark Treasury yields rose to their highest in almost a month and the dollar index, which measures the greenback against a basket of six other currencies, was up 0.25 percent at 95.261.

“Today we are seeing the knee-jerk reaction as far as the dollar to just move on rate differentials and the bond market move,” said Steven Englander, global head of G10 FX research, Standard Chartered Bank, in New York.

The public comment period for proposed US tariffs on an additional $200 billion worth of Chinese imports ended on Thursday, and investors await the firing of a fresh salvo in the ongoing Sino-US trade war.

“In some ways, it might have been easier for the market if it (US tariffs) had just been announced last night,” said Greg Anderson, global head of foreign exchange strategy at BMO Capital Markets in New York.

“It’s there as little bit of a bogey for the market,” he said.

White House Economic Adviser Larry Kudlow on Friday told CNBC that the United States continues to talk with China about a number of trade issues but added that so far China has not met US requests.

The Australian dollar skidded to near a 2-1/2-year low following weak home loan data and as trade-related tensions continued to pressure commodity-linked currencies. The New Zealand dollar slipped to trade just above a recent 2-1/2 year low of $0.6530.

Sterling jumped to a one-week high against the dollar on news the European Union’s chief Brexit negotiator, Michel Barnier, told British lawmakers earlier this month that he wanted to discuss with the UK how to solve the Irish border issue but that both sides were under great time pressure.