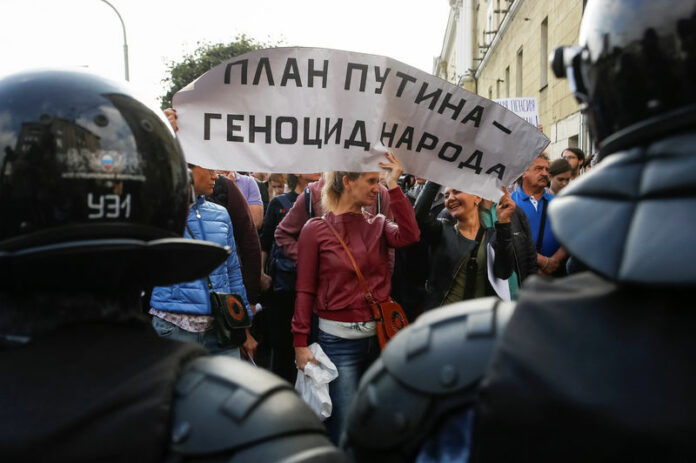 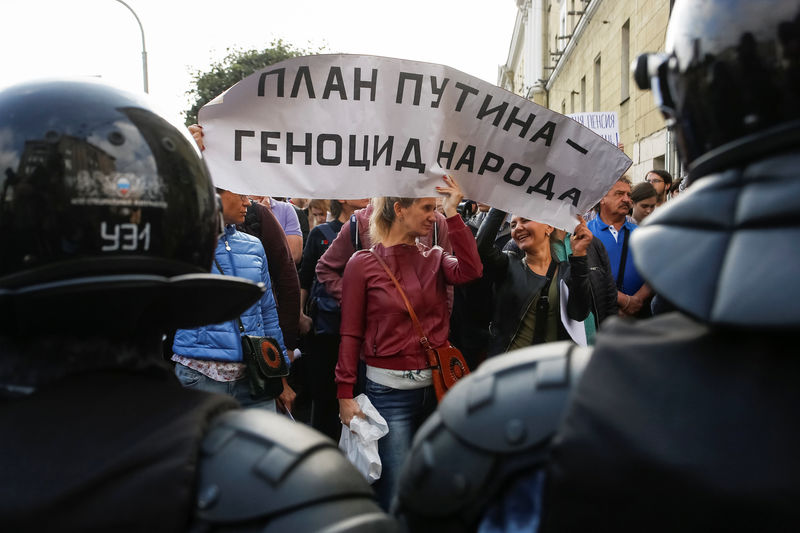 © Reuters. Protesters hold a poster reading “Plan of Putin – genocide of the people” in front of police officers blocking a street during a rally against planned increases to the nationwide pension age in St. Petersburg

By Andrey Kuzmin and Andrew Osborn

MOSCOW (Reuters) – Thousands of supporters of jailed opposition leader Alexei Navalny protested across Russia on Sunday against planned increases to the pension age, with a rights group saying at least 153 of them had been detained by the police.

The protests were a challenge to the authorities who were hoping for a high turnout at regional elections, also being held on Sunday, despite widespread anger over the pension move.

“The authorities are not listening to people and that means it’s time to take to the streets,” Navalny’s team said in a pre-protest statement.

The proposed pension changes, which are currently going through parliament, have shaved around 15 percentage points off President Vladimir Putin’s popularity rating. They are the most unpopular government measure since a 2005 move to scrap Soviet-era benefits, which led to nationwide pensioner protests.

Navalny, barred from state TV and prevented from running against Putin for president earlier this year, hopes to tap into public anger over the reform.

He had planned to lead a protest in Moscow on Sunday, but a court last month convicted him of breaking protest laws and jailed him for 30 days. Navalny said the move was designed to derail the protests which took place in 80 towns and cities, including Moscow and St Petersburg.

OVD-Info, a rights organization that monitors detentions, said 153 Navalny supporters had been detained by police on Sunday in 19 towns and cities, including some of Navalny’s closest aides.

In Moscow, where the authorities had rejected an application from Navalny’s supporters to protest, around 2,000 people gathered in the central Pushkin Square (NYSE:), the authorities and Reuters reporters estimated.

Some of them chanted “Russia will be free” and “Putin is a thief” as riot police looked on and ordered them to disperse or face prosecution.

“I have come here to protest against the pension reform, I have to live in this country and I want to have hope for the future and a good old age,” said 22-year-old Nikolai Borodin.

Another protester, Katya Shomnikova, 23, said: “They (the authorities) stole my future life, we will have to correct what’s been done. I want a better life for myself and my children.”

A Reuters witness saw police detain at least one protester in Moscow.

After being amended by Putin, the reforms envisage raising the retirement age for men to 65 from 60 and to 60 from 55 for women. Average life expectancy for men is 66 and for women 77.

Opinion polls put Navalny’s support in the single digits, but backers note he won almost a third of the vote in a 2013 Moscow mayoral race, and believe he could give Putin a run for his money if ever allowed to run against him on a level playing field.

Putin makes a point of never mentioning Navalny by name but has suggested he is Washington’s pick for the Russian presidency.

Navalny has likened Putin to an autocratic tsar who has clung to power for too long. The authorities have not registered his Russia of the Future Party.

Elections to select the heads of 26 of Russia’s 85 regions are also being held on Sunday, including in Moscow.

Google (NASDAQ:) removed a YouTube advert by Navalny after authorities complained that the videos would violate an election silence law before Sunday’s vote for regional governors, an aide to Navalny said on Saturday.