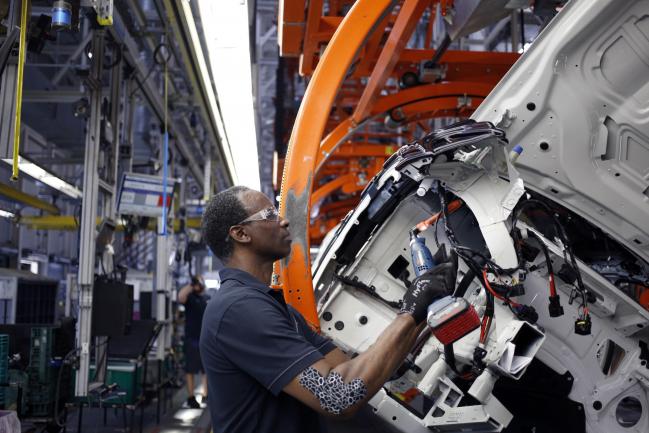 Americans Haven’t Felt This Good About Income Growth Since 2001

© Bloomberg. A worker assembles a Bayerische Motoren Werke AG (BMW) vehicle at the BMW Manufacturing Co. plant in Greer, South Carolina, U.S. on Thursday, May 10, 2018. Markit is scheduled to release manufacturing figures on May 23. Photographer: Bloomberg/Bloomberg

(Bloomberg) — Economists say the country is close to full employment, but pay gains for American workers have been flat since 2015. Even last week’s upward blip in wage growth could be wiped out by inflation.

Yet Americans haven’t been this optimistic about future pay raises since the century began, according to the Conference Board’s monthly surveys.

The question is why.

Answers are elusive. Maybe they anticipate companies will finally include them in the bounty of record corporate profits. Perhaps the 3.9 percent unemployment rate has them feeling good about the economy in general, so they believe higher pay is only a matter of time. Or maybe it’s the data.

The jobless rate has been at or below 5 percent for 36 straight months. But inflation-adjusted wage growth is at an ebb, too. It was actually negative on a year-over-year basis in July for the first time since January 2017.

Wage-growth numbers have what’s called a composition bias, according to Marta Lachowska, a senior economist at the W.E. Upjohn Institute for Employment Research in Kalamazoo, Michigan. That means “lots of people are coming off the sidelines and getting hired at relatively low wages,” which could be dragging down statistics.

To correct for this, the Federal Reserve Bank of San Francisco has adjusted wage-growth figures to account for new and returning workers. This resulted in a gain of as much as 2 percentage points to median weekly earnings growth.

Labor flows and a lower prime-age employment ratio — meaning the percentage of 25- to 54-year-olds who have jobs — provide support for the composition argument.

“Seven in 10 people who get jobs weren’t actively looking,” said Elise Gould, a senior economist at the Economic Policy Institute, a progressive Washington think tank. “They’re coming from outside the labor force,” which includes those who are working and seeking work.

The Conference Board’s question on confidence is about income and not wages, according to Lynn Franco, who directs surveys at the research organization. That might skew results slightly in favor of stock-market investors and entrepreneurs who are more likely than wage earners to see blue skies ahead, even with employer compensation remaining “the primary source for most folks.”

Whatever the reason, don’t dismiss consumer expectations, said George Selgin, director of the Center for Monetary and Financial Alternatives at the libertarian Cato Institute.

“These sentiment surveys are at least as reasonable as any economist’s predictions,” Selgin said. “Including mine.”