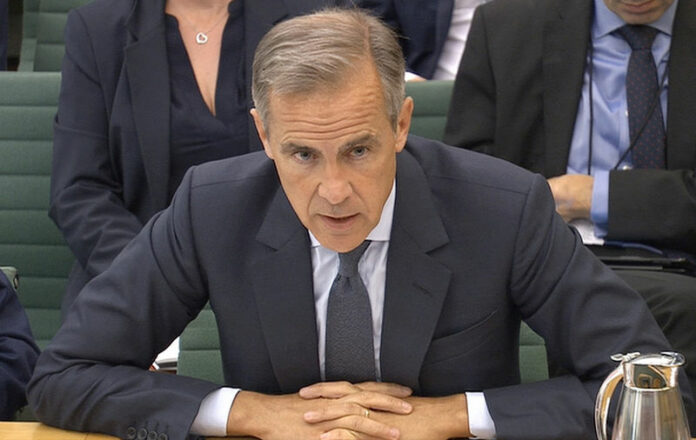 © Reuters. Mark Carney, the Governor of the Bank of England, speaks to the Houses of Parliament’s Treasury Committee, in London

LONDON (Reuters) – Bank of England Governor Mark Carney will stay at the central bank an extra seven months until the end of January 2020 to help smooth Britain’s departure from the European Union next year, finance minister Philip Hammond told parliament on Tuesday.

Carney had been due to step down at the end of June 2019 — having extended his term by a year already to cover the immediate months after Brexit — but last week he told legislators he would be willing to stay longer if requested.

British media had previously reported the finance ministry was keen for Carney to extend his stay and was having difficulty finding a suitable successor.

“I am willing to do whatever I can in order to promote both a successful Brexit and an effective transition at the Bank of England and I can confirm that I would be honored to extend my term to January 2020,” Carney said in a letter to Hammond.

Before Carney joined the BoE in July 2013, he said he only wished to serve five years of the standard eight-year term for a BoE governor to minimize his children’s time away from their native Canada.

Hammond said Carney would provide “vital stability” for Britain’s economy during the Brexit transition and the extension was also welcomed by Nicky Morgan, the chair of the parliament committee which monitors the BoE and the finance ministry.

Carney focused heavily on minimizing financial market turmoil in the run-up to June 2016’s European Union referendum and has warned since of the costs of a disorderly Brexit, drawing fire from Brexit supporters.

But financial market economists broadly welcomed the extension for Carney, who early during his period of office gained the moniker of an “unreliable boyfriend” due to mixed signals about the future path of interest rates.

Last November the BoE raised rates for the first time in more than a decade and increased them again last month, when Carney said that market expectations of a further rate rise a year for the next few years would be a reasonable rule of thumb.

“It would have been preferable to have avoided a piecemeal extension to his term at the Bank. But bearing in mind the uncertainties in the economy, I think it’s a good thing he’s staying,” Investec economist Philip Shaw said.