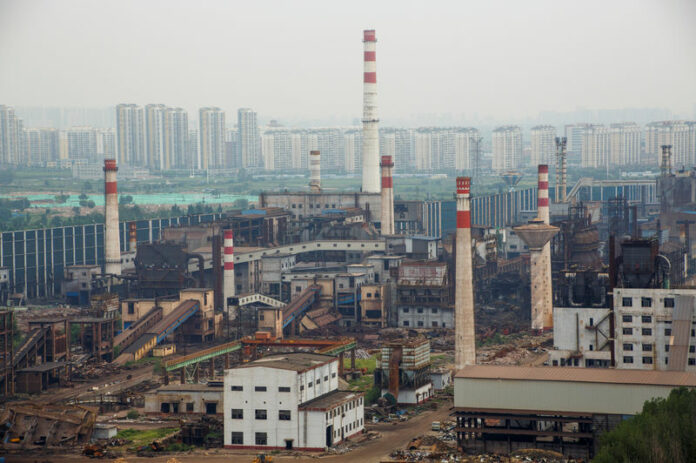 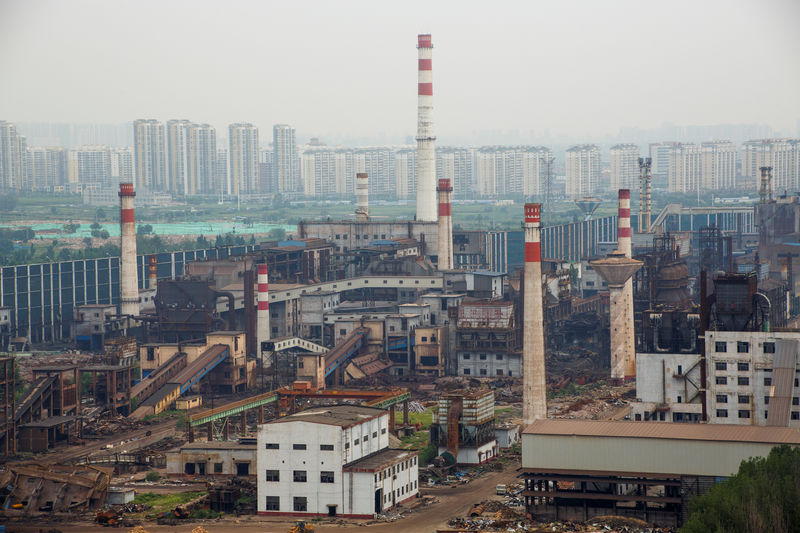 By Muyu Xu and Thomas Peter

TANGSHAN, China (Reuters) – “Push the steel mills out of the city center and turn it into a modern, habitable place to live in,” reads a banner hung across the boarded-up offices of Guofeng Iron and Steel Co in the center of Tangshan, China’s top steelmaking city.

Behind the gates of the factory, surrounded by a hospital, a shopping mall and high-rise apartment blocks, workers and bulldozers were busy on a recent visit tearing down furnaces as part of a 38 billion yuan ($5.5 billion) plan to move to a new industrial park 60 kilometers (37 miles) away.

Six hours drive away to the southwest, meanwhile, executives at Hebei Xinjin Iron & Steel Co, a Handan-based medium-size mill, are scrambling to find a new site in the south after being served notice to leave their home province last month.

The two steelmakers are among the first producers in Hebei province to comply with the local government’s latest audacious plan to make its smoke-stack industries more efficient and clean the notoriously toxic air of the northern industrial heartland.

Provincial authorities ordered mills, including some owned by HBIS Group, the world’s fourth largest steelmaker, in almost a dozen of its smoggiest cities to shut, move to a new industrial park on the coast or get out.

The moves, detailed in a document published on the province’s website in July but not previously reported, mark a new front in the government’s years-long war on pollution and outdated excess capacity in heavy industry, heralding even more upheaval for the debt-laden steel sector.

After years of weeding out “zombie” mills and permanently shutting idled plants, these are some of the toughest steps yet as provincial administrators confront the challenge of meeting tougher central government emissions targets.

“Mills in Handan are now scrambling to look for a new place to move,” Zhanpeng, a manager at Xinjin, told Reuters.

Xinjin has had talks with some governments in eastern Anhui and southern Guangxi provinces in recent months, but no decision has been made, he said.

Tangshan missed its air quality goals last year, during which the city produced more steel that the whole of the United States.

Hebei’s aim is to cut steel capacity to 200 million tonnes per year (tpy) by 2020, down 20 percent from 2017. Jiangsu, China’s second-largest steelmaking region, issued a similar plan in August.

But the strategy will come at a huge financial cost to the mills, and environmental experts have questioned whether moving them to the coast will improve the region’s air. Those leaving Hebei and Jiangsu may simply shift the problem south.

“It could be a problem because environmental management and regulatory oversight in the south are weaker than in the north,” said Ma Jun, director at Institute of Public & Environmental Affairs (IPE), a Beijing-based non-profit organization.

“What I am concerned about is that the moves will not necessarily improve air quality in Hebei, since the remaining mills might ramp up output to fill the market gap.”

In its plan, Hebei has told six mills to absorb capacity from 17 smaller rivals and move by 2020 to four industrial parks dedicated to steelmaking in Fengnan, Caofeidian, Canzhou and Jingtang on Bohai Bay, southeast of Beijing.

Guofeng is one of the companies being swallowed up by a larger competitor, Xinhua Metallurgy, along with four other operators, according to company statements.

At Fengnan, the newly-created company is building a state-of-the-art mill covering an area more than twice as large as New York’s Central Park that will produce 7.9 million tpy of precision steel, such as high-strength metal used in railways.

That’s much lower than the combined 9.9 million tpy produced by the companies now.

Construction started last year and the first phase is expected to finish next month, according to two staff at the site on a recent visit.

Underscoring the significance of the project for Hebei, a slogan on a government sign strung across a newly-erected building on the site says: “No delay and no rest”.

“Big steelmakers will have a bigger voice when they negotiate with foreign miners on iron ore imports. That’s also what the government wants to see,” said Richard Lu, steel analyst at consultancy CRU in Beijing.

By 2020, China’s top 10 steelmakers will account for 60 percent of national capacity, up from a third currently, while Hebei aims to cut its portion of nationwide steel output to 20 percent from nearly 30 percent.

The Xinhua project is partly being funded by central and local government. But those forced to move will have to find financing, stirring concerns that the industry may load up on more loans.

The sector’s debt ratio is 67.3 percent, down from 70 percent last year as mills benefited from soaring metal prices, but it is still higher than the 56.6 percent average for China’s general industrial companies.

Tangshan is steeped in steel.

Hundreds of small private producers, who took advantage of vast local iron ore and coal deposits, have been shuttered in recent years by the government’s push to clean the air and cut excess capacity.

But removing mills entirely will transform the cityscape and lives of citizens, who have watched it rebuilt since a devastating earthquake in 1976.

“All steel mills in this region will be shut. When that day comes, I will shut my business and move to somewhere else as well,” said a resident, who has run a small restaurant near Guofeng’s factory for 14 years. She declined to give her name.

Officials pledged to invest more than 100 billion yuan ($14.6 billion) this year to upgrade the city’s economy.

But companies are struggling to find regions that will accept them due to environmental pressures. Southern Guangdong province has banned new industrial capacity in the Pearl River Delta region to limit pollution.

Still, many saw the writing on the wall. The biggest steel mill in provincial capital Shijiazhuang, Hebei Jingye Steel Group started looking for a new home before the plan came out.

“Even though our mill is far from the city center and has adopted sophisticated environmental equipment, we thought that sooner or later we would have to move,” said Zhang Lijie, a manager at the firm.