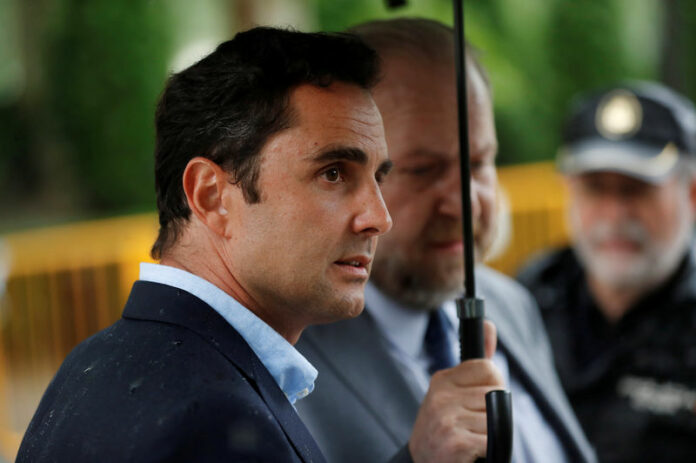 MADRID (Reuters) – A whistleblower fighting extradition to Switzerland for leaking details of thousands of clients of HSBC’s (L:) private bank there said on Tuesday his actions had played a key role in helping other European countries uncover tax frauds.

Hailed as a hero by some for triggering investigations in several countries, Swiss courts sentenced Falciani in absentia to five years in jail for leaking details of HSBC clients, many of whom he said he suspected were evading tax.

Spanish courts and anti-corruption prosecutors have played a key role in investigations in other European countries by passing on information that originated from Falciani.

“I want to recognize the institutions with which I have been able to collaborate…and this is why this court has played a fundamental role in helping several European judicial authorities,” Falciani told Spain’s High Court.

Falciani said that France should be thankful to Spanish authorities, pointing out that HSBC Holdings agreed to pay 300 million euros ($353 million) last November to settle a long-running investigation into tax evasion by French citizens via its private bank in Switzerland.

The agreement was the first under a French system introduced in 2016 to allow companies to settle without any finding of guilt.

Spanish Prosecutor Teresa Sandoval opposed the extradition request for Falciani partly because the charges included in the Swiss ruling are not considered a crime in Spain.

“The truth is that the information that Mr. Falciani collected from the bank was never transmitted to private individuals and only to official organizations,” Sandoval said.

Her stance was supported by Falciani’s lawyer Juan Ballarat.

Falciani was arrested in Madrid in April while on his way to speak at a conference on whistleblowing.

Spain’s High Court released him from custody the next day but ordered him to remain in Spain while the extradition request was considered.

Judicial sources told Reuters they expect the judge to issue a ruling on the extradition request in the coming days or weeks.

Falciani has been detained once before in Spain on Switzerland’s request – on a trip in 2012. He was released after the High Court ruled against his extradition, finding the charges he faced in Switzerland were not considered crimes under Spanish law.