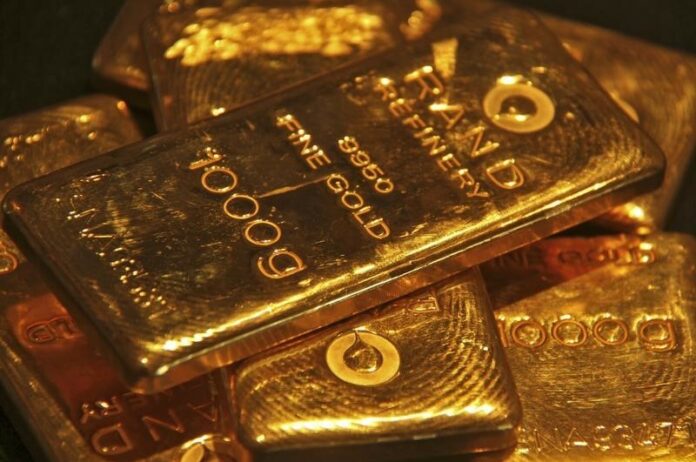 © Reuters. Gold prices fell below $1,200 on Wednesday morning in Asia

Investing.com – Gold prices fell below $1,200 on Wednesday morning in Asia as investors shy away from precious metals on concerns of the burgeoning U.S.-China trade war.

In view of the trade tensions between Washington and China, investors turned to the U.S. dollar with the belief that the country might have less to lose from the dispute, driving futures up by 0.12%.

U.S. President Donald Trump told journalists on Tuesday that Washington is taking a tough stance with Beijing. He threatened last Friday to slap a fresh wave of tariffs on an additional $267 billion of Chinese goods, rattling markets.

China is seeking World Trade Organization’s permission to sanction $7 billion worth of U.S. goods in retaliation for Washington’s non-compliance with a dispute ruling over the country’s dumping duties.

The yellow precious metal nosedived over 12% from a peak in April this year, losing its safe-haven status to the U.S. dollar.

Gold could take another hit later this month. Investors expect the U.S. Federal Reserve to hike interest rates, which could boost demand for the greenback and lower demand for gold.

On the supply side, Canada’s RNC Minerals unearthed over 9,000 ounces of gold from a blast at its Beta Hunt mine in Western Australia, raising the supply of gold.