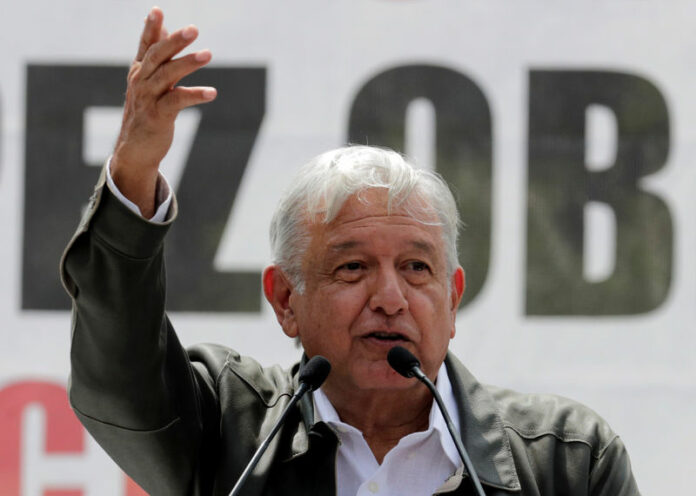 © Reuters. Mexico’s President-elect Andres Manuel Lopez Obrador speaks during a rally as part of a tour to thank supporters for his victory in the July 1 election, in Mexico City

The phone call came after Mexico, the United States and Canada agreed on a new trilateral trade deal late Sunday, which Lopez Obrador hailed as a “good accord” that would create economic certainty and encourage investment.

The two leaders also discussed “a next step,” agreeing on investment between Mexico, Canada and the United States to aid development in Central America and Mexico to tackle “the migration phenomenon,” said Lopez Obrador, who takes office on Dec. 1.

“He looks favorably on it,” the leftist Lopez Obrador told reporters at the Mexico City airport, referring to Trump.

The Mexican president added that representatives of his incoming government will travel to the United States in the next few days, including foreign minister-designate Marcelo Ebrard.

It was a “great call,” Trump tweeted, with Lopez Obrador, adding that “we will work well together!”

Lopez Obrador said a plan was being put together for development projects across the country. They ranged from a new oil refinery to a train connecting parts of southern and eastern Mexico that his team has discussed.

The projects belonged to a “general development plan” that would require more than $30 billion in total investments, he said. It was not clear how much would be divided between public and private investors, or between countries.

Lopez Obrador, who was elected in July, said U.S. Vice President Mike Pence will attend his inauguration, not Trump.

Before the election, Lopez Obrador said he wanted to reach a deal with Trump to prioritize development in Mexico’s poorer south and in Central America to stem illegal immigration, which has caused tensions between Washington and Mexico.

Trump provoked widespread outrage in Mexico when he described Mexican migrants as rapists and drug-runners during his own election campaign. He also pledged to build a southern border wall to stop migrants, saying Mexico would pay for it.

Lopez Obrador has shied away from addressing the wall to avoid clashing with Trump. However, he said in the run-up to the Mexican election that U.S. money would be better spent on aiding development south of the border than on a wall.