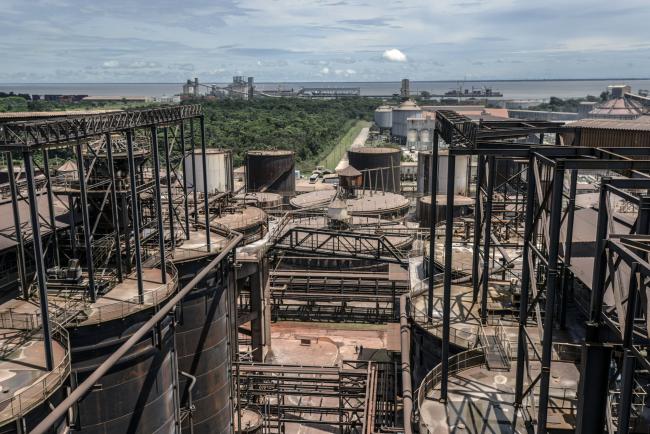 Turmoil Looms for Aluminum Again as Key Plant Shuts Down

(Bloomberg) — The market risks being thrown back into turmoil after the world’s largest refinery of a key raw material shut down.

Norsk Hydro ASA said it will temporarily close the Alunorte alumina refinery in Brazil because of a long dispute over waste treatment. The plant was already running at just 50 percent capacity.

The stoppage will increase the scarcity of alumina — a key ingredient for producing aluminum — and raising the possibility of higher metal prices filtering through the global supply chain, which would affect manufacturers like automakers and canned drink suppliers. The market has been tight for months due to U.S. sanctions on Russia’s United Co. Rusal.

“We seem to be out of the frying pan and into the fire for alumina,” said Anthony Everiss, an analyst for CRU Group.

While there’s no alumina contract on the LME, the effect was clear elsewhere in the market today. Aluminum prices jumped as much as 3.6 percent to $2,194 a ton, reaching a three-month high. Norsk Hydro shares plunged as much as 14 percent in European trading.

Alumina is turning out to be the key swing factor in the global supply chain for aluminum, and the Norsk Hydro plant shutdown will fuel volatility as manufacturers search for alternative supplies.

“There’s clearly now a risk that it’s going to be out for a while. That makes it pretty difficult for the alumina market,” said Colin Hamilton, an analyst at BMO Capital Markets in London. “We’re looking at a period of higher-than-expected prices.”

Alumina is up about 45 percent this year, averaging $479 a ton since the end of December, according to data from S&P Global Platts. Steep prices will encourage other companies to start up alumina production, and China had now become a net exporter, Hamilton said. He cautioned that it’s too early to expect aluminum production to be curtailed.

Still, the big question for the aluminum market is whether the U.S. Treasury will soon lift sanctions on Rusal, or force companies to completely cut ties — which would cause another round of chaos for the market. The two sides are in negotiations and there are signs of progress, but it remains a key risk.

Aluminum supply has gradually tightened this year because of the Rusal sanctions and other shortages. Inventories tracked by the London Metal Exchange have shrunk more than 17 percent in the past two months.

For Hydro, the Alunorte shutdown is the latest setback in a difficult year. It has faced a long legal battle related to an alleged dam spill in February, which local regulators say contaminated rivers and wells. On Wednesday, the company also said it will close down the Paragominas bauxite mine.