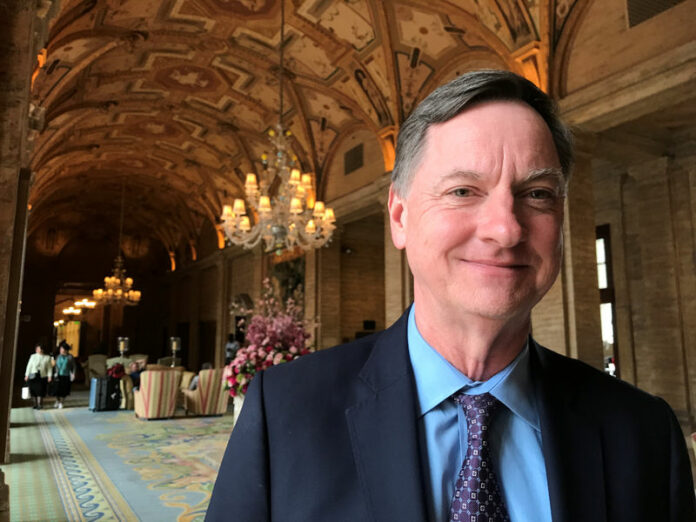 With rates on the rise, Fed must plan for next downturn, Evans says © Reuters. FILE PHOTO: Charles Evans, president of the Federal Reserve Bank of Chicago, poses for a photo in Palm Beach

LONDON (Reuters) – With the U.S. economy strong, inflation nearly back to the Federal Reserve’s 2-percent goal, and the Fed’s gradual rate hikes likely to begin mildly restraining growth by late next year, it is time to consider how best to fight the next downturn, a U.S. central banker said on Wednesday.

“We need to plan ahead,” Chicago Federal Reserve Bank President Charles Evans said in remarks prepared for delivery in London, making clear he sees the current recovery well in hand.

Fundamental changes in the economy since the financial crisis mean that rates won’t need to rise as high as in the past to have a braking effect on the economy.

That means there will be less room to cut interest rates to stimulate the economy when the next downturn occurs, and the Fed could be forced to again use controversial tools like bond-buying to spur growth.

“Now is a good time to take a hard look at whether — and how — the Fed’s strategic monetary policy framework might be modified to better deal with these potential challenges,” Evans said.

Calls for coming up with a new policy framework have mounted as the Fed has begun lifting rates. Fed Chair Jerome Powell has so far stayed largely out of the public debate of what could come next, and it’s unclear how much support he would lend a broad rethink of policy approaches.

Evans on Wednesday noted several possibilities, including raising the inflation target to 4 percent, or adopting price-level targeting where the central bank allows inflation to rise above target for extended periods during a recovery to make up for long periods of below-target inflation during a slump.

Such an approach could pose problems in practice, Evans noted, since the public may not tolerate high inflation well.

Further, he noted, “achieving our maximum employment and inflation mandates might require some long periods of strong monetary policy accommodation,” which could pose risks to financial stability. Such considerations must also be part of assessing any new framework, he said.

Finally, the Fed should also consider leaving its current framework intact, Evans said, bolstering it with small tweaks instead of replacing it entirely.

“When judging whether we stay with our current framework or move to an alternative, we need to remember that the key criterion is the ability to deliver on the central bank’s mandated policy goals,” he said.