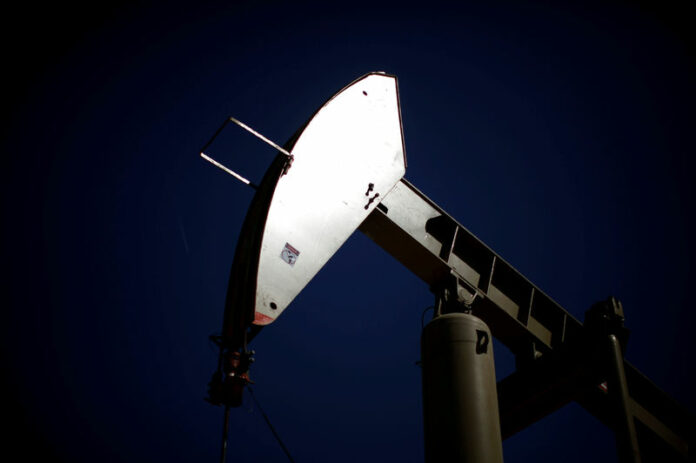 © Reuters. FILE PHOTO: A pumpjack brings oil to the surface in the Monterey Shale, California

Brent on Wednesday hit a four-year high of $86.74 a barrel, lifted by expectations of a tightening market ahead of U.S. sanctions that will target Iran’s oil exports from next month.

“Data for last week showed a much more significant than expected … build in U.S. commercial crude (inventories), which generally suggests that oil prices should tumble,” said Stephen Innes, head of trading for Asia-Pacific at futures brokerage Oanda in Singapore.

U.S. weekly Midwest refinery utilization rates dropped to 78.9 percent, their lowest since October 2015, according to the data.

(For a graphic on ‘U.S. oil drilling, production and storage levels’ click https://tmsnrt.rs/2OKP4nJ)

“This on top of the other big news of the day from Riyadh that … Saudi Arabia and Russia will boost output,” Innes said.

Russia and Saudi Arabia struck a private deal in September to raise oil output to cool rising prices, Reuters reported on Wednesday, before consulting with other producers, including the rest of the Organization of the Petroleum Exporting Countries (OPEC).

Russia’s and Saudi Arabia’s actions come as markets have heated up ahead of U.S. sanctions against Iran’s oil sector, which are set to kick in from Nov. 4, and which many analysts expect to knock around 1.5 million bpd of supply out of markets.

On the demand side, there is increasing concern that high oil prices and weakening emerging market currencies are creating a toxic inflationary mix that could erode fuel demand and economic growth.

“We have been taking a very close look at the demand signals in the market, and what we have been seeing is not good, JBC Energy said on Wednesday in a note to clients.

The energy consultancy said it had revised its oil demand forecast downwards amid Brent prices above $80 and diving currencies in many emerging markets, as well as burgeoning product stocks and the ongoing Sino-U.S. trade dispute.

“We are not talking about cosmetic changes either. We have cut our forecast for 2018 demand growth by a whopping 300,000 bpd to below 1.1 million bpd,” it said.

The impact of surging fuel costs is starting to show. In India, record retail fuel prices have contributed to farmer riots, in what is becoming a challenge to Indian Prime Minister Narendra Modi in an election that must be held by May.

(For a graphic on ‘Oil prices in different currencies’ click https://tmsnrt.rs/2OffFwp)