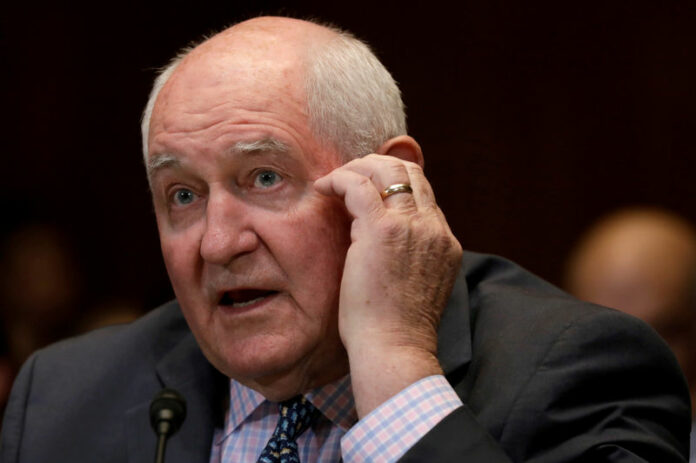 WASHINGTON (Reuters) – U.S. Agriculture Secretary Sonny Perdue said on Thursday that the United States “probably made a mistake” becoming too trade dependent on China and added that the administration was pursuing trade deals elsewhere.

U.S. farmers have been hit hard by the Trump administration’s ongoing trade dispute with China, which has shut off billions of dollars worth of agricultural trade between the giant economies.

“We probably made a mistake, frankly, I’d say in hindsight, in becoming too dependent on that huge China market,” Perdue told a gathering of the North American Meat Institute forum in Washington. “When you have so much of your business in one big customer, disruptions like this can mean pain. I think our strategy is to go around the world.”

“There’s a hungry world out there besides Canada, besides, China, and we’re pursing that aggressively,” he added, saying the administration was seeking out new agreements with the European Union, Japan and India, among others.

The Trump administration slapped tariffs on $200 billion of Chinese goods last month and is threatening to extend the duties to virtually all remaining goods China exports to the United States.

Late on Sunday, the United States and Canada reached a deal to overhaul the North American Free Trade Agreement (NAFTA), complementing an accord the Trump administration brokered with Mexico, the third member of NAFTA, in late August.

Perdue was vague when asked about the benefits that the new accord, the United States-Mexico-Canada Agreement (USMCA), will confer on U.S. agriculture, and declined to quantify how much additional trade it would create for American farmers, a major segment of Trump voters.

“We get better access for dairy, poultry, eggs … all those are improvements,” he said.

While many farm industry groups hailed the sealing of USMCA, they said it was far from complete without a resolution to an ongoing dispute over steel and aluminum between the three countries. In late May, the Trump administration announced tariffs of 25 percent on steel imports and 10 percent on aluminum imports, prompting retaliation from top trading partners including Canada and Mexico.

Trump said those tariffs would remain in place for Canada and Mexico until they “can do something different like quotas, perhaps.”

“We’re hopeful that those rules will be relaxed,” Perdue said, citing conversations between Trump and U.S. Trade Representative Robert Lighthizer.

But he added there was no concrete timeline for when they could be removed.