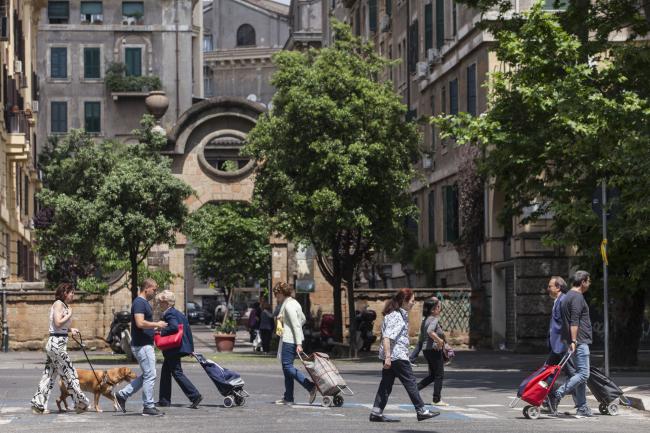 Italy Hangs Its Budget Plan on Unrealistic View of Economy

© Bloomberg. Pedestrians wheel luggage as they cross a road in Rome, Italy, on Friday, May 11, 2018. An Italian Photographer: Giulio Napolitano/Bloomberg

(Bloomberg) — The controversial budget plans of Italy’s populist government are hanging on an economic premise that looks too optimistic.

A week after releasing an initial deficit target, the coalition finally unveiled the figures underpinning that aim. It sees growth of 1.5 percent in 2019, followed 1.6 percent and 1.4 percent in subsequent years. By comparison, the median in Bloomberg’s latest survey is for expansion of no more 1.2 percent.

“Whilst government forecasts always fall on the optimistic side, this particular assumption hints at significant fiscal slippage risk ahead in case of an economic slowdown,” said Axel Botte, a strategist at Ostrum Asset Management.

The Five Star-League coalition says its program will help increase jobs, demand and overall expansion, but the economic outlook may not sit well with investors and the European Union. Both have already balked at the budget proposals, with the former pushing 10-year yields back above 3 percent, and the latter said Italy is “jaywalking” when it comes to fiscal rules.

Heightening the risk, growth is showing signs of a slowdown across the 28-nation European Union, already unnerved by trade wars. The looming budget standoff between Brussels and Rome led European Commission President Jean-Claude Juncker to warn against a repeat of the Greek crisis.

In a statement on Thursday evening, Italian Finance Minister Giovanni Tria said he hopes the talks with EU will be “open and constructive.”

The fiscal outline is “responsible and brave, and it seeks to focus on growth and citizens’ well-being, also ensuring a decline in the deficit profile,” he said.

There is cause for broader concern, with the situation inflamed by reports of infighting within the administration, delays in publishing all the key numbers, and comments that seemed to question Italy’s commitment to the euro currency.

Deputy Prime Minister Matteo Salvini said Wednesday that debt will decline “because more people will go back to work.” He also said he doesn’t “give a damn” about threats from the EU. But short-term fiscal stimulus won’t solve longer-term issues that have left Italy as the slowest-growing economy in the euro area.

“The reality is that Italy’s problems are not about whether it meets its budget deficit next year or the year after,” Talib Sheikh of Jupiter Asset Management told Bloomberg Television. “It’s about can they undergo some deep-seated structural change. Italy’s ultimate problem is a lack of structural growth and it’s not clear to me that many of the populist agendas make any step toward that.”

(Updates with details of government plan.)