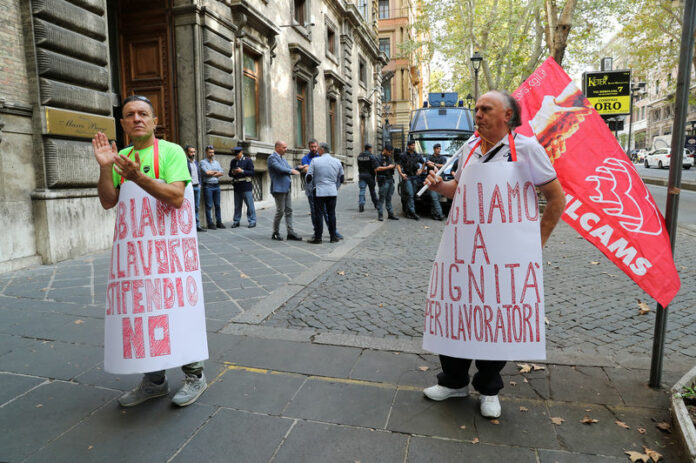 Italy talks up its expansionary budget as clash with EU looms 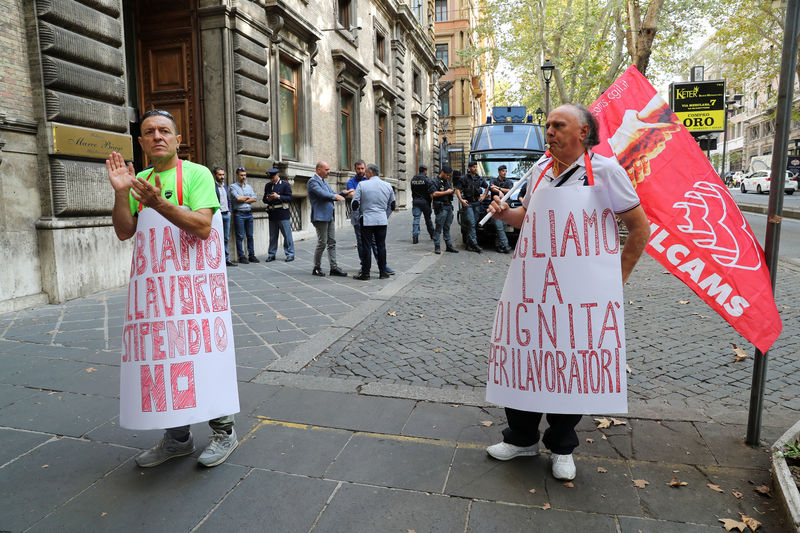 © Reuters. People wearing signs protest in front of the Italian Ministry of Labour office in Rome

By Angelo Amante and Crispian Balmer

ROME (Reuters) – Italian Prime Minister Giuseppe Conte said on Tuesday he was proud of his government’s freshly approved expansionary budget while the European Commission warned it may run into opposition from euro zone partners.

Italy’s governing coalition of the right-wing League party and anti-establishment 5-Star Movement vow not to backtrack, saying their big-spending plan is needed to boost growth and tackle worsening poverty in the euro zone’s third-largest – but most sluggish – economy.

The weeks of wrangling that preceded the budget’s approval and the previously announced plan to raise the deficit took markets on a roller coaster ride, but its passage by Conte’s cabinet seemed to be saluted with relief.

Italian government bond yields dropped across the board, and the gap between the yield on the 10-year benchmark and its German equivalent narrowed.

“We are convinced that austerity is a path that can no longer be followed,” Conte told parliament ahead of a European Union summit later this week where his peers are expected to ask him about the budget.

Conte said he would seek to explain the government’s strategy to European partners in a dialogue “without prejudice”.

Next year’s projected 2.4 percent of output deficit is well below the EU’s 3 percent ceiling – a policy to discourage member states from going down a path of unsustainable spending – but it is up sharply from a targeted 1.8 percent this year.

This contravenes EU regulations that call on Italy and other highly indebted countries to steadily narrow the shortfall toward zero.

“If we accepted everything that the Italian government was proposing, we would see a virulent counter-reaction from other euro zone countries,” European Commission President Jean Claude Juncker told reporters in Brussels.

Ralph Brinkhaus, the group leader of Angela Merkel’s conservative party in the German parliament, signaled that Berlin was worried.

“It’s with concern that we are looking at Italy, especially because of its budget. We have full confidence that the European Commission will handle the question in the way imposed by the treaties,” Brinkhaus told reporters in Berlin.

The commission now will have two weeks to review Italy’s fiscal plans underpinning the budget. It could reject them completely and ask Rome to rewrite them, an unprecedented step that would formally begin a long dispute.

But Juncker also cautioned against creating too much furor over Italy’s budget, as did Mario Centeno, who heads the euro zone finance ministers’ Eurogroup.

“I don’t want us to overdramatise this budget issue, but I want us to return to the application of the EU rules, not in a strict fashion, but in a fair and wise way,” Juncker said.

“The euro is built on decisions taken at many various moments and places. Italy’s budget is just one of those moments and events,” Centeno said in a news conference in Lisbon.

“I do hope that at the end the war of words (will end) and that good sense will prevail and everyone will notice that this kind of budget is exactly what Italy needs to cope with its chronic lack of growth,” he said in a televised interview with CNBC.

The Italian government is also set to introduce a more punitive tax regime for banks, heightening pressure on a sector that is suffering due to a spike in the country’s debt costs under the populist government.