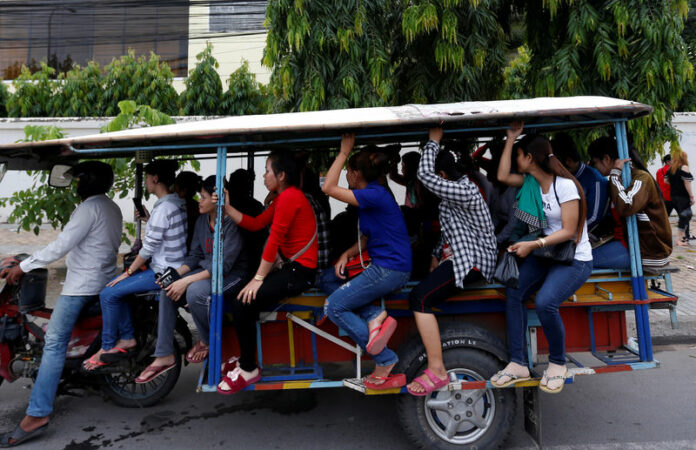 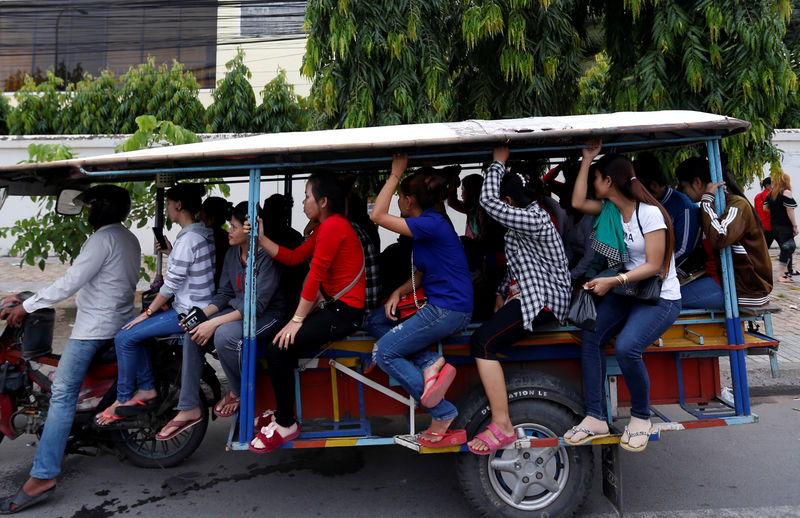 © Reuters. Garment workers travel back home as they leave a factory after work, on the outskirts of Phnom Penh

PHNOM PENH (Reuters) – A European Union decision to ramp up trade pressure on Cambodia has alarmed unions in its garment industry, a pillar of the economy that employs about 700,000 people, but a key grouping of manufacturers said the risk would take months to materialize.

Cambodia’s biggest export market, the EU, warned this month that the Southeast Asian nation would lose special access to the world’s largest trading bloc, in a punitive response to its move away from democracy.

Some Western countries have criticized a July election won by Prime Minister Hun Sen, calling it flawed, because of a campaign of intimidation by his allies, and the lack of a credible opposition dissolved by the Supreme Court.

The repercussions could devastate garment exports that account for about 40 percent of Cambodia’s gross domestic product (GDP), and industries such as sugar.

“The European market is an important one,” said At Thon, the president of the Coalition of Cambodian Apparel Workers’ Democratic Union.

“If factories close their doors, it will be hard.”

Cambodia’s exports to the European Union, under its “Everything but Arms” (EBA) scheme, were worth 5 billion euros ($5.8 billion) last year, EU data show.

Although Hun Sen vowed to defend Cambodia’s sovereignty in the wake of the EU announcement, some union leaders fear workers already grappling with personal debt could see bank balances plunge further into the red.

“Workers borrow some money to build houses for their parents or do other businesses,” Sia Kunthea, president of the Cambodia Women Labor Union Federation, told Reuters.

The European Chamber of Commerce in Cambodia is seriously concerned about the possibility of trade preferences being withdrawn, it told the European Commission this week.

“We would suggest a different course of action to foster the EU’s core values, through cooperation activities rather than by implementing a suspension or sanctions,” the body representing the private sector, said in a letter.

Cambodia’s $7-billion apparel industry is the largest formal employer among a population of 15 million.

“It will be difficult if the EBA is suspended,” said Hoeun Tharith, 42, a shoe factory worker and father of three, adding that he shrank from the consequences of losing his monthly income of about $210.

Yet the Garment Manufacturers Association of Cambodia (GMAC), which represents 600 factories, is optimistic.

The threat of tariffs was still months away and would be the subject of a six-month EU review, said Kaing Monika, the grouping’s deputy secretary general.

“At this point, nobody can guarantee what the outcome will be and whether it will result in a substantial loss,” Kaing Monika told Reuters.

“What we are more concerned about is the media speculation leading to reduced confidence from buyers and investors … the actual situation might be much less frightening.”

Some say it is too soon to tell if buyers will pull out and turn to lower-cost Asian rivals.

Sweden’s H&M, which sources from 62 factories in Cambodia, said it understood the need to look into the rights situation, but urged the European Union to also weigh the impact on workers.

“Potential negative effects on the employment for the people in the garment industry must be taken into consideration,” it said in a statement to Reuters, without saying if it planned to pull out of Cambodia.

Costs are lower in neighboring Vietnam, another garment-making hub, where the minimum wage ranges from $114 to $165.

This advantage will only improve after a hike of seven percent takes effect in Cambodia’s textiles and footwear industry in January, pushing the corresponding figure to $182.

“Of course if companies move Vietnam might benefit a little bit,” Dang Phuong Dung, a former official of the Vietnam Textile and Apparel Association, told Reuters.