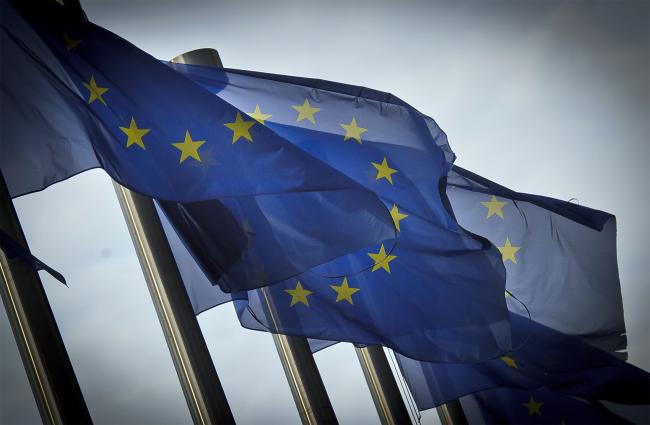 © Bloomberg. European Union (EU) flags fly outside the the European Commission headquarters, in Brussels, Belgium, on Monday, Dec. 19, 2011. European finance ministers will today seek to meet a self-imposed deadline for drawing additional aid to the debt crisis and to form new budget rules as investor confidence that a comprehensive solution is achievable wanes.

(Bloomberg) — Poland’s government has asked the Constitutional Tribunal to rule whether European Union law supersedes national legislation, escalating a standoff with the bloc over the rule of law.

Justice Minister Zbigniew Ziobro, who’s also the chief prosecutor, wants to check if the EU’s 2009 Lisbon Treaty, which allows local judges to ask the European Court of Justice for guidance, violates Poland’s Constitution. A number of Polish courts have reached out to the Luxembourg-based EU tribunal to vet cases linked with the government’s overhauls of the justice system, which the EU says undermine judicial independence.

Ziobro said Germany’s top court ruled in 2009 that its Constitution has supremacy over EU laws and Poland “doesn’t want to be treated any different” than the EU’s political and economic heavyweight. His inquiry was published on the Constitutional Tribunal’s website late Tuesday. It comes days before local and municipal elections, triggered accusations from the opposition that Poland was preparing ground to exit the bloc.

“Poland is doing great in the EU and I don’t see a reason why we can’t ask the Polish Constitutional Court the same question that the German top court was asked,” Ziobro told reporters on Wednesday. “Criticism that this is a signal of a Polish Brexit of sorts is pure manipulation. Our views on EU membership haven’t changed at all.”

The way Poland structures its judiciary remains a sovereign prerogative, Ziobro said, adding that he’s not seeking to “radicalize” relations with Brussels. Critics say that a ruling by the Constitutional Tribunal against the EU could give the government a pretext to reject EU court decisions.

A number of Polish judges, including some at the country’s Supreme Court, asked the ECJ if the government’s overhauls are in line with the bloc rules on judiciary independence. Poland seeks to seal its court overhauls and has began to discipline judges who publicly speak out against the reforms.

The opposition, which is battling to stop the Law & Justice party’s push to consolidate its already considerable grip on power in Sunday’s elections, pounced on the development as another indication that the government intends to follow the U.K. out of the trading bloc.

A survey last month showed that 87 percent of Poles back EU membership. Poland is the biggest net recipient of EU largess, helping to transform the formerly communist nation where living standards remain at about 70 percent of the EU average.

“Ziobro’s inquiry effectively pushes Poland out of the EU,” Kamila Gasiuk-Pihowicz, a lawmaker from opposition Nowoczesna.pl told reporters. The government ”will be responsible if Warsaw and other cities lose billions of euros from EU funds.”