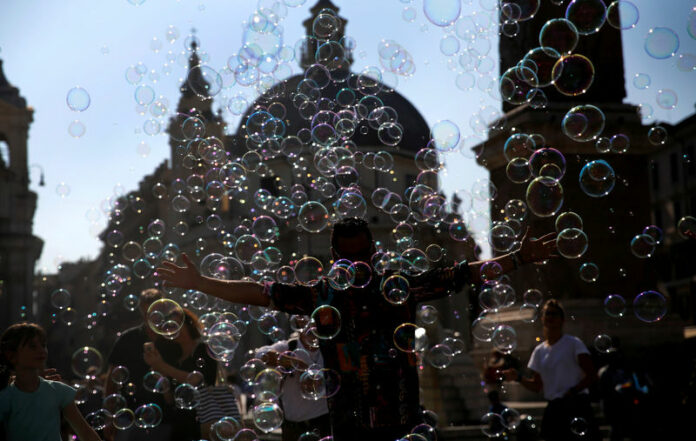 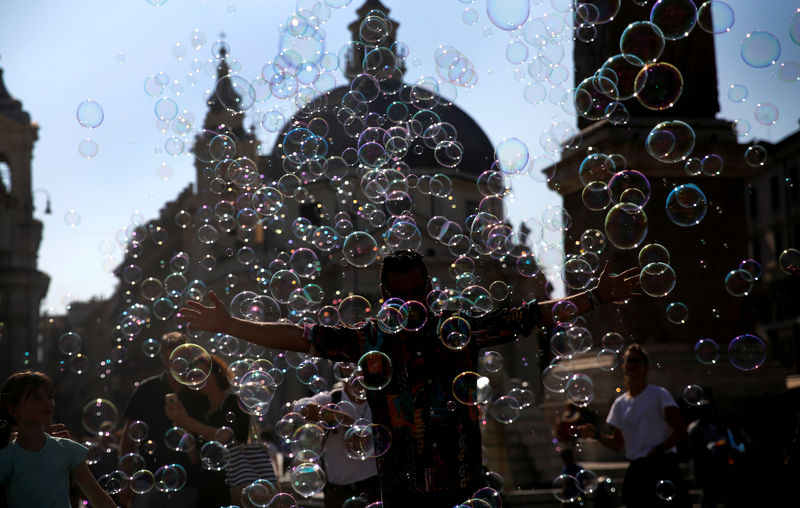 LONDON (Reuters) – Italy may have to act to contain a surge in its borrowing costs sooner than comments from the ruling coalition government suggest.

The economy minister pledged this month to do whatever was needed if the 10-year bond yield gap over Germany – effectively the risk premium on Italian bonds – widened to 400 or 500 basis points. And with significant risk already priced in, a further blowout in the spread is unlikely for now.

But lawmakers’ comments suggest the issue remains a contentious point as Italy draws up its spending plans, given Deputy Prime Minister Matteo Salvini’s controversial vow to expand the budget deficit whatever the “lords of the spread” – i.e, bond investors – may think.

Such remarks underline the importance of the spread and how wide it would have to get before Rome finds it intolerable.

The Italy-Germany spread is now around 305 bps, near its widest in five years. It has swelled 150 bps this year, the most since 2011, as Rome’s budget plans create tension with the European Union and put Italian credit ratings at risk of downgrades.

But some market watchers say that rather than the 400-500 bps spread Italian officials have mentioned, the pain threshold is closer to 350-360 bps. Those levels – consistent with 10-year Italian bond yields of around 4 percent – would likely trigger a sharper rise in borrowing costs and contagion across the bloc, they say.

“At 350-400 bps it becomes very hard for investors to stay calm on Italian bonds,” said Michael Leister, head of rates strategy at Commerzbank (DE:). “It would show there is not a quick solution to the Italian problem.”

In short, it’s the spread widening impact on banks and Italy’s ability to fund its borrowing that’s at stake.

Given that Italy’s debt-to-GDP ratio is around 130 percent, its debt-servicing costs at a 4 percent interest rate come to about 5 percent of gross domestic product, he said.

“If nominal GDP in Italy grows by 3 percent at best, that means that the government would need to maintain a primary surplus of 2 percent just to keep the debt constant,” Deluard added.

The primary budget surplus — the budget balance net of interest spending — is targeted at 1.8 percent this year, up from 1.4 percent in 2017 but still short of that 2 percent.

Citi analysts say 10-year bond yields above 4 percent – 50 bps up from current levels () – could be the “tipping point” for selling to accelerate. Goldman Sachs (NYSE:) reckons a sustained spread move through 300 bps would require action from Italy or the EU.

J.P. Morgan adds that higher spreads over time add cumulatively to the interest expenses and “eat up fiscal space.”

“As a rule of thumb, we consider that 100 bps increase in the yield curve leads to a roughly 0.15 percent of GDP increase in interest payments in a given year,” the bank said in a note.

So far the economy and public have not felt the full effect of the spread widening as many household lending benchmarks are still essentially linked to official ECB interest rates. Italian mortgages are priced against Euribor (Euro Interbank Offered Rate) and not Italy’s sovereign yield curve.

Furthermore, Italy has taken advantage of low borrowing costs in recent years to extend the average remaining maturity of its debt to around seven years. That means rising yields take longer to feed into higher debt refinancing costs.

But the yield spike and wider spreads do increase borrowing costs at bond auctions. A three-year bond sale last week saw Italy pay its highest borrowing rate in five years, although the auction size was small at 3.5 billion euros.

According to UniCredit, the Italian government has raised 325 billion euros in bills and bonds so far this year at an average cost of just below 1 percent, mostly to refinance maturing debt, which carried a cost of 1.3 percent on average.

But the length of time these elevated costs persist is as important as the peaks and troughs they may briefly hit, and problems will mount if yields stay high into next year.

Rabobank head of rates strategy Richard McGuire says a rise in the weighted-average yield of Italian bonds is worrying as it is consistent with a rising path in debt servicing costs.

He estimates that a yield at a weighted-average maturity of 2.63 percent would keep debt/GDP levels constant. An Italian bond maturing in June 2025, the closest in duration to the weighted average maturity, has a yield of 3.06 percent

A more immediate hit is being felt by banks. Italian lenders hold around 375 billion euros of domestic bonds – accounting for 10 percent of their assets – and the spike in yields, by eroding the value of those holdings, eats into their capital levels.

Any widening of the spread to 400 bps would force some lenders to tap investors for cash, the Italian traders’ association Assiom Forex said recently.

Morgan Stanley (NYSE:) estimates that the overall impact of spread widening since the second quarter on Italian banks’ capital levels is between 1 and 14 bps.

Based on the size of their bond portfolios and the starting levels of their Common Equity Tier 1 ratio – a core measure of a bank’s financial strength from a regulator standpoint – Banco BPM, UBI and BMPS are most vulnerable, Morgan Stanley said.

It’s no surprise that a jump in Italian yields is usually accompanied by a plunge in bank stocks, often spilling into European markets.

In that environment, confidence in policymakers’ ability to stop market turmoil turning into a crisis can easily evaporate, forcing them to act quickly.

May offered proof; spreads briefly topped 300 bps on fears of a snap election that could become a de facto referendum on euro membership. 5-Star and the League – the parties comprising Italy’s coalition – the quickly moved to form a government.

An unwinding of ECB stimulus and higher U.S. Treasury yields also make for a volatile backdrop.

Contagion into the euro zone has been remarkably subdued considering Italy is the bloc’s third-biggest economy. That too may change.

One channel could be the investment industry, should Italian bond losses force fund managers to sell Spanish or Portuguese debt to protect portfolio returns for the year.

“Like it or not, the development of the Italy-Germany spread will decide the performance of most euro bond portfolios this year, even those not invested in Italy,” said Commerzbank’s Leister.