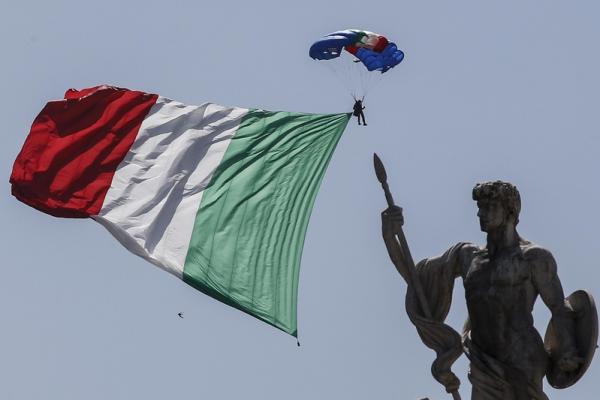 Italy Faces Off With EU as Pressure Mounts Over Budget Defiance

© Reuters. Italy Faces Off With EU as Pressure Mounts Over Budget Defiance

(Bloomberg) — The gloves came off in Italy’s fight with the European Union, as several of the bloc’s leaders attacked the populist government in Rome and the EU’s executive warned that its budget draft won’t fly.

Markets took fright at the prospect of more upheaval in the euro area’s most indebted nation after Greece, with the Five Star Movement-League coalition setting itself on a collision course with Brussels over its spending plans. Bonds and stocks fell as Prime Minister Giuseppe Conte, a law professor with no previous political experience, failed to convince his fellow EU leaders that Italy should be allowed to flaunt the EU’s fiscal rulebook.

“We have no understanding whatsoever for Italy’s draft budget plan,” Chancellor Sebastian Kurz, who holds the EU’s rotating presidency, told reporters. “We in Austria will certainly not pay for the debts of others and we will not pay for left-wing populist election promises.”

Italy was not on the agenda of the EU summit but its EU-skeptic stance on migration and above all its budget defiance came up in all the briefings by leaders. Even as Conte argued Italy’s case in one-on-one talks with Chancellor Angela Merkel, President Emmanuel Macron and Dutch Prime Minister Mark Rutte, the EU commission dispatched a letter to Rome saying its spending plans were excessive. It gave the government until Monday to provide an explanation for the “obvious significant deviation” to the rules.

The extra yield investors demand to hold Italy’s 10-year government bonds over comparable notes in Germany touched 327 basis points amid the standoff, the most since April 2013. The increase in the yield premium also spilled over elsewhere, with the FTSE-MIB Index of shares extending its losses to tumble 1.9 percent at the close. Spreads of other peripheral economies widened too, with the difference between benchmark notes in Spain and Germany touching the highest since May.

Rutte took Conte to task after their meeting. “I don’t believe you can spend yourself out of a crisis and into growth,” he said. “The best fast-track to growth is reducing the deficit.”

While Conte lobbied in Brussels, EU Commissioners Valdis Dombrovskis and Pierre Moscovici wrote to the Italian government requesting changes to its draft budget, saying both the budget’s fiscal expansion plans “and the size of the deviation are unprecedented.”

Moscovici delivered the letter in Rome during a meeting with Finance Minister Giovanni Tria.It marks the start of a process that could culminate in a decision by the commission to issue a negative opinion next week — essentially rejecting Italy’s budget — and asking the Italian government to send it back with revisions. That has never happened before.

Populist coalition leaders Luigi Di Maio of the anti-establishment Five Star Movement and Matteo Salvini of the anti-migrant League have both ruled out making any changes to the budget, which sets a wider deficit as it seeks to start to deliver on election promises including a “citizen’s income” for the poor, tax cuts and a lower retirement age.

Divisions within the coalition added to the political turbulence, with continued wrangling over the extent of a tax amnesty. Di Maio said in a video on his Facebook (NASDAQ:) page that the spread had risen “because the markets think that the government is no longer united.” He asked for a cabinet meeting “to clear things up.” Salvini refused, saying he had other engagements and needs to see his children.

An escalation of Rome’s clash with Brussels would occur if Italy opted not to change its spending plans and stuck to its deficit target. While Brussels has no real powers over countries’ budgets, governments seek to avoid a reprimand because of the potential market implications it could have. If the commission finds a country persistently breaks deficit rules, it could open a so-called excessive deficit procedure — a process where a country has to reduce its deficit by a set deadline or risk sanctions of up to 0.2 percent of output.

While other euro-area countries including Belgium — home to the EU — received letters requesting clarification of budget plans, Italy’s case is more extreme. The letter to Rome represents a “significant political rift” with the rest of the euro area, said Guntram Wolff, Director of Brussels-based Bruegel think-tank.

“It is of course correct that sanctions come late and the process to sanctions is long,” Wolff said. “But what matters is not the sanction itself but the fact that there is a clear political conflict that the commission cannot and does not want to sweep under the carpet.”

Perhaps sensing the potential for conflict to feed support for Italy’s populists in the run-up to next year’s European elections, Merkel and Macron, the bloc’s leaders and heads of the No. 1 and No. 2 economies respectively, sought a more conciliatory approach.

“What was Italy a victim of? A lack of solidarity in the financial crisis and a lack of solidarity during the peak of the migration crisis, this is what fed the rise of extremes in Italy,” Macron said. “No one should judge the Italians on the choices they have made.”

Merkel also avoided confrontation, saying that while she had “of course” discussed Italy’s spending plans with Conte, it was a matter for the commission. Jean-Claude Juncker, the Commission’s president, insisted it felt no “negative bias” toward Italy. Its budget will be examined with “the same rigor and same flexibility” as for other countries, he said.