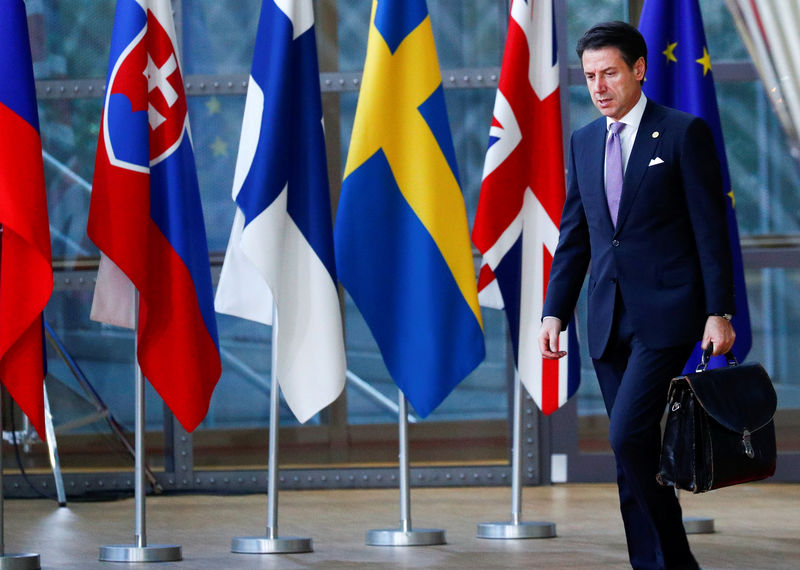 BRUSSELS (Reuters) – Italy’s Prime Minister defended the country’s “beautiful” 2019 budget on Thursday, saying he had expected Brussels to criticize it as European authorities stepped up pressure for changes to a draft that breaches the bloc’s fiscal rules.

Giuseppe Conte also denied a rift over the fiscal plan within his governing coalition, after reports of a spat over tax revenues.

The draft, signed off by Italy’s cabinet on Monday, will hike the deficit at a time when under EU regulations it should be narrowing, as well as boosting welfare spending and cutting the retirement age.

In the first formal step of a procedure that could lead to Brussels rejecting the budget and to fines against Italy, an EU official told Reuters the European Commission was expected to deliver a warning letter to Rome on Thursday.

“I’m aware this is not the budget the Commission expected. I expect critical observations. We will discuss and we will reply to these considerations,” Conte told journalists on the second day of a two-day EU summit, prior to reports of the new EU letter.

He described the budget as “beautiful”, having said on Wednesday that he saw no room for changing tack on it.

The letter will be handed by Economics Commissioner Pierre Moscovici to Italy’s Finance Minister Giovanni Tria in a meeting in Rome, the EU official said.

If it is not amended, the Commission could reject the draft by Oct. 29 in what would be an unprecedented move that could further rattle markets..

Yields on Italian benchmark 10-year bonds spiked after elections in March that gave eurosceptic parties a large boost [IT527480=], rising further as the outline of an ambitious fiscal plan that could further boost Italy’s public debt ratio – proportionally already the second highest in the EU after Greece – became clear.

EU leaders also warned Italy about the budget at the summit.

Austrian Chancellor Sebastian Kurz said fiscal rules should be respected by all, adding: “Too much debt is dangerous.”

Dutch Prime Minister Mark Rutte said on Twitter he had expressed concerns over the budget plans in a meeting with Conte on Thursday. He added that the Commission had Netherlands’ full support in making sure EU fiscal rules were respected.

In what could be a source of concern at home, Deputy Prime Minister Luigi Di Maio, leader of the 5-Star party, said on Wednesday a legislative text on a partial tax amnesty had been “manipulated” before its final approval, raising doubts about the stability of Italy’s coalition government and about the revenues for its budget.

The anti-establishment 5-Star has always opposed amnesties – a frequently used policy in Italy where people or companies can avoid being pursued for tax dodging by paying a fee. Its coalition partner, the far-right League, favors amnesties, which bring money into the treasury and are popular with voters.

Di Maio did not clarify who could have amended the document.

Asked by reporters about a possible coalition rift, Prime Minister Giuseppe Conte – who is not from any political party – replied: “There is no division”. He added he would work on the legislative text after returning to Rome on Friday.