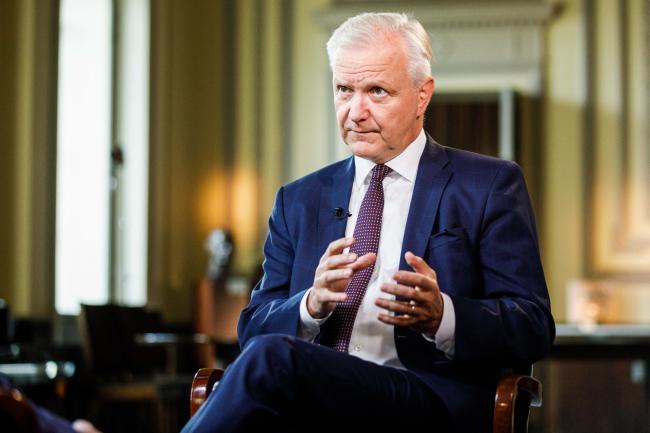 Speaking a week before the next policy meeting, Rehn told a Finnish radio station that financial markets seem well-aligned with the central bank’s guidance, which foresees borrowing costs staying at record low levels through the summer of 2019.

“Markets appear to be reading the ECB’s forward guidance correctly,” Rehn told YLE Radio 1. “The starting point should be that if the economy develops roughly in line with the current outlook, the first rate increases would take place in the final quarter of 2019.”

Rehn’s comments come as the ECB prepares to cap its bond-buying program by the end of the year, and will feed into the debate over the exact timing of rate lift-off. Dutch Governor Klaas Knot raised the possibility earlier this month that officials may consider speeding up the process of removing their extraordinary stimulus if the euro-area economy evolves in line with projections.

He said the Governing Council has yet to discuss its strategy for reinvesting proceeds from maturing debt under quantitative easing, but the decision will be taken in the coming months. In any case, reinvestment of government and corporate debt will continue for “quite a long time.”

Rehn also joined in criticism of the 2019 budget draft that Italy’s populist government sent to Brussels earlier this week. The plan, which foresees a deficit three times the previous government’s projection, was criticized late Wednesday by Bundesbank President Jens Weidmann, who said the euro area’s third-largest economy should focus on reducing its massive debt pile.

“The fundamental question in Italy is how it is able to renew its institutions, structures and strengthen productivity growth and through those measures reach sustainable growth and employment,” Rehn said. “That’s unlikely to be resolved through stimulus paid for with debt.”