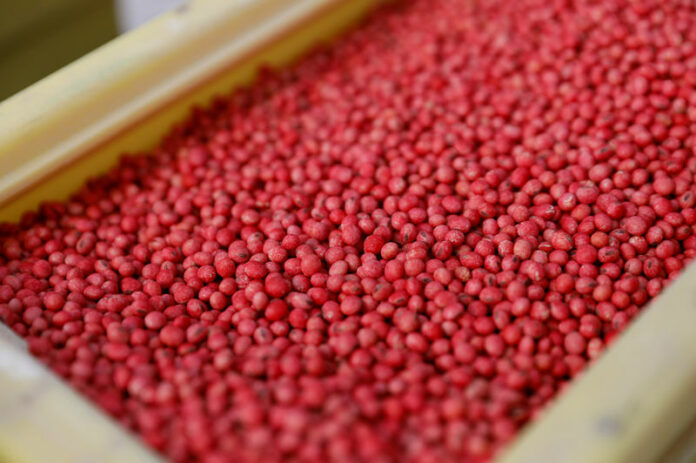 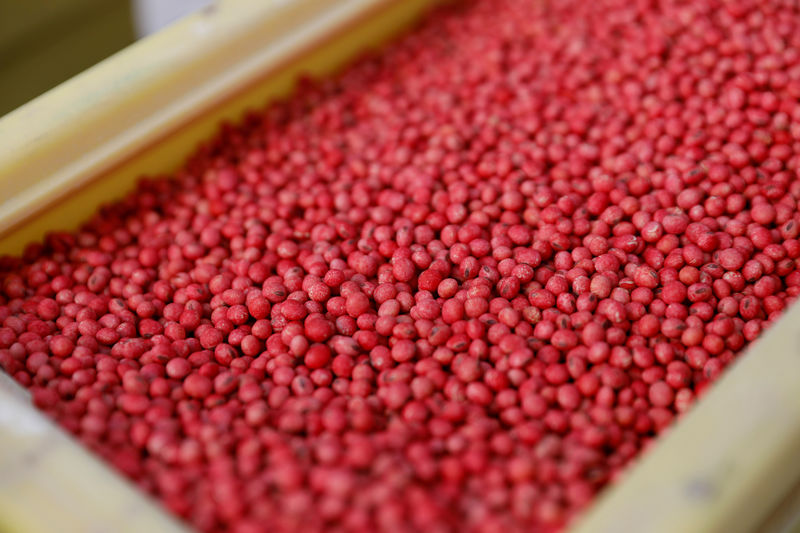 © Reuters. FILE PHOTO: Soybean seeds in a container at a farm in Gideon, Missouri

By Naveen Thukral and Dominique Patton

(Reuters) – China’s soybean imports are set to drop by a quarter in the last three months of 2018, their biggest fall in at least 12 years as buyers curb purchases amid the Sino-U.S. trade war and high domestic stockpiles.

Soybeans, crushed to make protein-rich animal feed ingredients and vegetable oils, have been at the heart of the tit-for-tat trade dispute between the world’s top two economies.

China in July imposed a retaliatory 25-percent import duty on U.S. soybeans as part of the conflict, a saga that has gathered steam since then with the introduction of fresh tariffs on other products.

“Imports will average around 6 million tonnes per month in the fourth quarter,” said a Singapore-based trader at an international company that owns oilseed processing plants in China.

“Purchases are going to be mainly from Brazil and some from Argentina and Canada. Buyers are not willing to take chances by bringing in U.S. beans,” the trader added, declining to be identified as he was not authorized to speak with media.

The benchmark Chicago soybean contract dropped to a 10-year low of $8.12-1/4 last month, although prices have since recovered on fears of crop-damage following rains ahead of the harvest in parts of the U.S. Midwest. It was trading down 0.8 percent at $8.78-1/2 on Thursday.

The landed cost of U.S. beans in China is currently similar to Brazilian soybeans even with the 25-percent tariff, but Chinese crushers are reluctant to take U.S. supply as they fear authorities may not approve cargoes and that tariffs could climb further.

“Right now China’s import duty on U.S. wheat is 25 percent, who knows, the duty might go up to 50 percent by the time your boat arrives,” said Ole Houe, director of advisory services at brokerage IKON Commodities in Sydney.

China’s soybean purchases of around 24 million tonnes in the fourth quarter of last year were more than triple 2006 levels, climbing for 10 out of 12 years, according to the country’s customs data.

The estimated decline of 4 to 6 million tonnes in October-December this year would be the biggest fall since at least 2006.

China, which largely uses soy in feed for the world’s biggest pig herd, is unlikely to face a shortfall in supplies despite the drop in imports as it has abundant domestic reserves after a strong pace of imports.

“We will be fine until the end of February. For March, April, it’s a bit tight, but if demand is not so good, then we can probably even survive until then,” said a Beijing-based soybean trader who forecast imports in the fourth quarter at 20 million tonnes.

Soybean stocks at China’s ports stood at 8.57 million tonnes this week, down marginally from a record of around 9 million tonnes at the end of last week.

Crush margins in Shandong, the hub of China’s soybean processing industry, have been in positive territory since early August, reaping strong profits for companies making feed ingredients such as soymeal.

“Soymeal demand from the feed millers has been pretty strong as they build stocks,” said the first Singapore-based source.