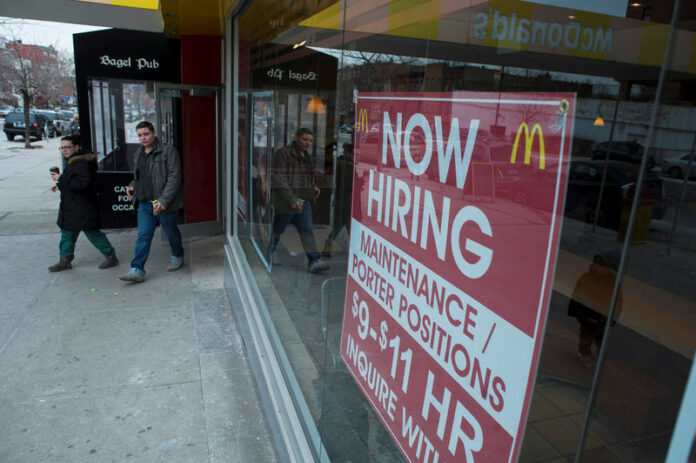 © Reuters. FILE PHOTO: Passersby walk in front of a help wanted sign at a McDonalds restaurant in the Brooklyn borough of New York

A strong labor market and robust economy likely keep the Federal Reserve on course to increase interest rates again in December. The U.S. central bank raised rates in September for the third time this year and removed the reference to monetary policy remaining “accommodative.”

Initial claims for state unemployment benefits decreased 5,000 to a seasonally adjusted 210,000 for the week ended Oct. 13, the Labor Department said on Thursday. Claims fell to 202,000 during the week ended Sept. 15, which was the lowest level since November 1969.

Economists polled by Reuters had forecast claims slipping to 212,000 in the latest week. The Labor Department said claims for South and North Carolina continued to be affected by Hurricane Florence, which drenched the region in mid-September. Claims for Florida were impacted by Hurricane Michael.

The four-week moving average of initial claims, considered a better measure of labor market trends as it irons out week-to-week volatility, rose 2,000 to 211,750 last week.

The claims data covered the survey period for the non farm payrolls component of October’s employment report. While the four-week moving average of claims rose 5,750 between the September and October survey periods, that will probably not change expectations for a rebound in job growth this month after Florence depressed restaurant and retail payrolls in September.

The economy created 134,000 jobs in September, the fewest in a year. The labor market is viewed as being near or at full employment with the unemployment rate close to a 49-year low of 3.7 percent. There are a record 7.14 million open jobs.

U.S. financial markets were little moved by the data.

A separate survey from the Philadelphia Fed showed its business conditions index for the mid-Atlantic region slipped to a reading of 22.2 in October from 22.9 in September amid a drop in new orders. The survey showed higher employment at factories in the region, with more than 30 percent of responding firms saying they had increased payrolls.

The survey’s employment index rose 2 points to a reading of 19.5 this month and firms also reported increasing hours for workers. The workweek index jumped to a reading of