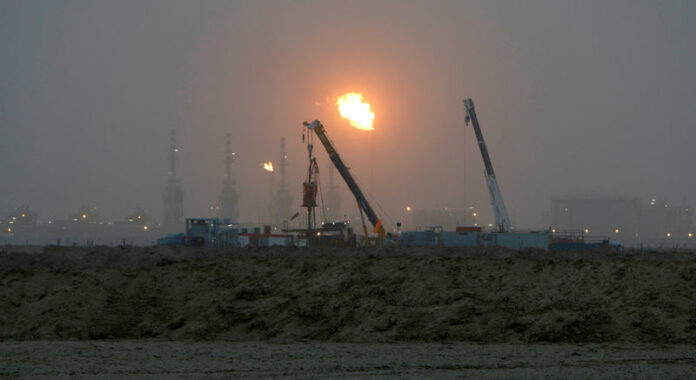 © Reuters. Flames emerge from a pipeline at the oil fields in Basra, southeast of Baghdad

SINGAPORE (Reuters) – Oil prices fell on Tuesday after Saudi Arabia said it would play a “responsible role” in energy markets, although sentiment remained nervous in the run-up to U.S. sanctions against Iran’s crude exports that start next month.

U.S. sanctions against Iran’s oil exports are due to kick off on Nov. 4, and Washington is putting pressure on countries to cut their imports of Iranian crude.

Top crude oil exporter Saudi Arabia has pledged to keep markets supplied despite its increasing isolation over the killing of Saudi journalist Jamal Khashoggi, and there are signs that crude oil supply from the Middle East is increasing.

There has been concern that just as markets tighten with the start of the U.S. sanctions against Iran, Saudi Arabia could cut crude supply in retaliation for potential sanctions against it over the Khashoggi killing.

Trying to dismiss such worries, Saudi Energy Minister Khalid al-Falih said on Monday that “there is no intention” for such action, and that Saudi Arabia would play a “constructive and responsible role” in world energy markets.

Peter Kiernan, lead energy analyst at the Economist Intelligence Unit in Singapore, said a Saudi cutback would be self-defeating as “Saudi Arabia would … risk losing market share to other exporters while losing its reputation as a stable actor in the market.”

Despite this, Sukrit Vijayakar, director of energy consultancy Trifecta, said “markets are … wary of the impact of U.S. sanctions on Iran’s oil sector,” estimating the sanctions “could impact up to 1.5 million barrels per day of supply.”

U.S. bank J.P. Morgan told clients in a note dated Oct. 19 that it had raised its 2019 Brent price forecast by a whopping $20.50 per barrel to $83.50, saying this “bullish argument is strongly driven by tighter supply due to Iranian sanctions and declining spare capacity”.

Not everyone is so bullish. Shipping brokerage Eastport said crude prices were “expected to decline in coming months, as rising production in the U.S. offsets increasing global demand”.

Reflecting a cautious outlook, traders have been curbing their exposure to oil markets by shutting long positions in crude futures, with fund managers cutting their combined positions by a total of 187 million barrels in the last three weeks, according to exchange and regulatory data.