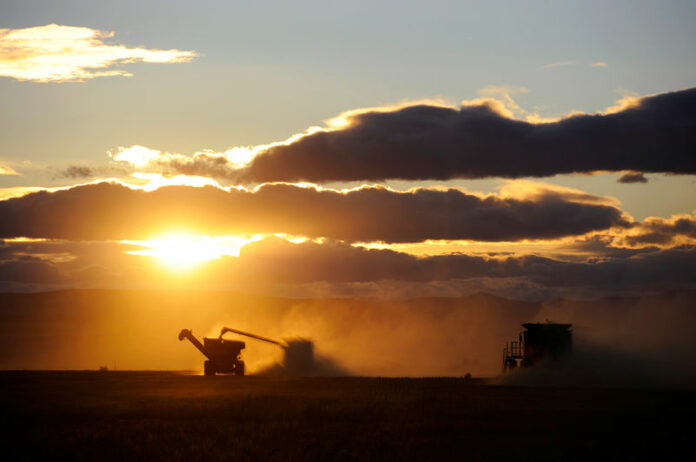 Trade retaliations against the U.S. hit Canada farmers, too 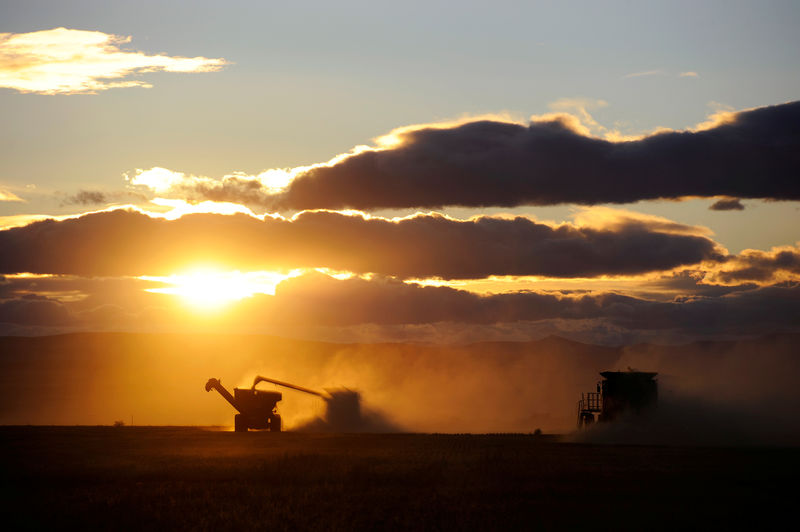 © Reuters. FILE PHOTO: Wheat is harvested on the Stephen and Brian Vandervalk farm near Fort MacLeod

WINNIPEG, Manitoba (Reuters) – The United States’ trade wars have allowed Canada’s agriculture industry to pump up sales of soybeans and wheat to China, and pork to Mexico.

But the same tariff battles are undermining commodity prices and eating into Canadian farmers’ profit margins even as they grab more market share.

Their struggles illustrate the complex global consequences of U.S. protectionism as tariffs launched by President Donald Trump spark retaliations and redraw global agricultural supply lines around the globe. In the case of Canada, farmers have become bystanders hit by retaliatory strikes aimed at the United States.

The situation is bad enough to prompt Canadian soy and hog farmers to demand compensation from Ottawa. Soybean growers here, whose crop amounts to just 6 percent of U.S. output, say they are worse off than U.S. farmers despite increased Canadian exports of the oilseed. (Graphic: Global soy prices – https://tmsnrt.rs/2P749Us)

The U.S. government has provided its farmers a $12 billion aid program to limit the damage from lost purchases by China, the world’s biggest soybean importer. But Canada has provided farmers no support to ease the sting of falling prices in the United States, which undermine the value of Canadian crops.

The government is monitoring the impact on farmers and has existing programs to mitigate such market risks, said James Watson, a spokesman for Canada’s agriculture department.

China, which bought one quarter of U.S. soybeans last year, halted most buying in July after Beijing imposed a 25 percent tariff on U.S. soy imports in retaliation for U.S. tariffs on a wide range of Chinese goods.

China has turned to other soybean exporters including Canada, Brazil and Argentina. In June, ahead of China’s July 6 imposition of tariffs against U.S. soybeans, Canada shipped 159,000 tonnes of soybeans to China, 12 times more than a year earlier, according to Statistics Canada.

But while Latin American soybean farmers are seeing a big boost in prices and profits with the rush of Chinese demand, their Canadian counterparts are seeing prices fall.

Canada soybean prices have slipped along with the benchmark U.S. soybean futures in Chicago, which fell by 23 percent from May through September. Since then, export demand has propped up Western Canadian prices, but they remain relatively low.

Many farmers are selling at C$11 per bushel for yields Sirski estimates at an average 31 bushels per acre in Manitoba. That results in revenue of C$341 per acre – barely above production costs of C$335. Such thin margins leave little room for error and may mean smaller Canadian soy plantings next year, he said.

Other sectors of the Canadian agricultural industry have taken a direct hit from changes in U.S. trade policy. The U.S. forced Canada to concede some market share in dairy and poultry under revisions to the free trade agreement between the two countries and Mexico.

Like soybean growers, Canadian pig farmers are hurting. Chinese tariffs on U.S. pork have raised alarm about demand, pressuring the U.S. hog prices on which Canadian sales are based.

Canada, the third-largest pork exporter, sold 19.5 percent more pork to Mexico in the first eight months of the year, according to Statistics Canada, including hams that Mexico would normally buy from the United States. The Canadian sales grew after Mexico imposed retaliatory tariffs on U.S. pork.

But Canada’s overall pork shipments declined, including to China, which is oversupplied, and the United States, its two biggest export markets.

Canadian Pork Council said in a statement in September that hog farmers need government compensation to cover losses related to trade wars, similar to a U.S. government payout of $8 per hog.

Canada does have other opportunities for gains if the trade war drags on.

Canadian farmers could sell 500,000 to 1 million tonnes more wheat than usual to China in 2018/19, depending on harvest quality, said Rhyl Doyle, director of export trading at Paterson Grain. Canada has averaged sales to China of 751,000 tonnes during the past five years.

But as with soy, such market gains have not lifted prices. ICE canola futures prices are down since spring, influenced by plunging soy prices, and Minneapolis spring wheat futures prices have made up little ground since then despite dry global conditions.

“It’s not going to be a banner year,” said Alberta farmer Matt Sawyer, who grows wheat, barley and canola. “It is disappointing.”

More Ontario corn is flowing into Europe, helped by European Union tariffs against the United States. But in Alberta, farmers expect a tide of U.S. corn in Europe that will compete with the barley and wheat they sell for cattle rations, said commodity broker Errol Anderson.

Down the road though, Canadian farmers’ pain may pay off with new customers, he said.

“We’re at the emotional stage,” Anderson said. “The U.S. goes down, and so (Canada) goes down too. But global trade patterns are changing, and long-term, the U.S. is going to lose out.”