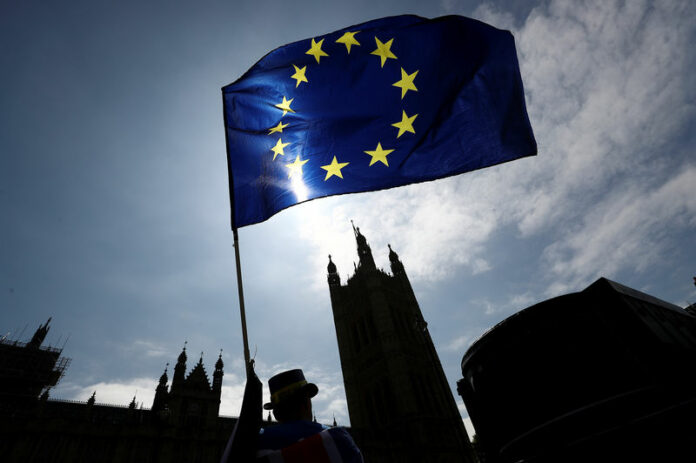 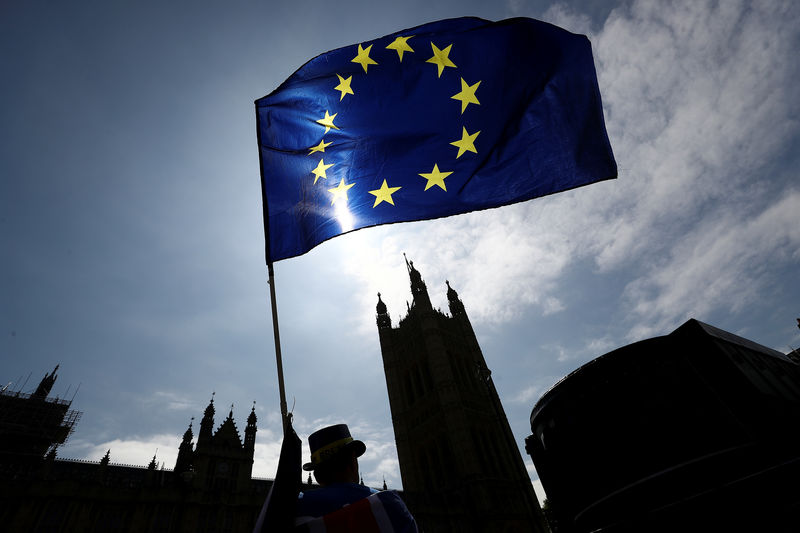 © Reuters. An anti-Brexit protester waves an EU flag opposite the Houses of Parliament in London

LONDON (Reuters) – Britain’s budget announcement on Monday and a “Super Thursday” at the Bank of England would normally be key moments for the world’s fifth-biggest economy, but this time they are likely to be overshadowed by the drama of Brexit.

Finance minister Philip Hammond and Bank of England Governor Mark Carney have little option but to sit on the fence as they wait to see whether a no-deal exit from the European Union, which they warn would harm the economy, can be averted.

Both men have other business they want to get on with.

Hammond is under pressure from Prime Minister Theresa May to end a decade of austerity to see off a rise in popularity of the opposition Labour Party.

At the BoE — where an interest rate decision and economic forecasts are due to be announced on Thursday — Carney and his fellow policymakers want to progress with their plan to raise borrowing costs gradually over the coming years.

That would allow the British central bank to follow the lead of other central banks, especially in the United States and Canada, which are dismantling 10 years of massive stimulus.

Expectations of another rate hike by the U.S. Federal Reserve in December are likely to grow if the monthly payrolls report on Nov. 2 shows further jobs growth and rising pay.

In the euro zone, data on economic growth and inflation on Tuesday and Wednesday will show whether the recovery in the single currency area has kept pace.

But in Britain, with Brexit just five months away, things are much less clear cut.

There is no sign of a Brexit breakthrough with Brussels, in large part because May’s Conservative Party is riven over how close Britain should remain to the European Union after it leaves the bloc.

“The budget is likely to be something of a holding exercise until the Brexit fog clears and the MPC is likely to remain in a state of inertia until there is a bit more clarity on the state of the Brexit negotiations,” Ruth Gregory, an economist with Capital Economics, a research firm, said.

When he stands up in parliament on Monday afternoon, Hammond is expected to use his high-profile budget speech to try to cool the Conservative rebels by dangling the prospect of higher spending in the future, as long as a Brexit deal is done.

Britain’s economy has slowed since the 2016 referendum decision to leave the EU. But it has not suffered as badly as many forecasters expected, giving Hammond some fiscal wiggle room to fund higher health spending already promised by May.

Hammond might get further help if Britain’s budget forecasters scale back their estimates of future deficits, as they have suggested they will.

But his ability to ramp up spending in other areas depends most on avoiding a new shock to the economy.

A no-deal Brexit would slash economic growth to just 0.3 percent a year in 2019 and 2020 compared with 1.9 and 1.6 percent if there is a deal, the National Institute of Economic and Social Research estimated on Friday.

Britain’s budget deficit would stop falling and would rise under a no-deal scenario, according to its forecasts.

Looking further ahead, Hammond has suggested he will need to raise taxes to help fund higher public spending.

But the prospect of getting controversial measures passed in parliament, where the Conservatives have no outright majority, is probably too daunting at a time of heightened Brexit tensions.

For the BoE, the Brexit stakes are high too.

It has begun raising interest rates from their crisis-era levels and its chief economist has said he sees signs of a “new dawn” for British workers’ pay, long the missing link in the country’s recovery from the financial crisis.

But most economists think it will wait until May to raise rates again, assuming Britain leaves the EU with a deal.

“In any other situation, we suspect the Bank of England would be looking to increase interest rates pretty soon,” ING economists said in a note to clients on Friday.

“But inevitably, Brexit remains policymakers’ number one consideration, and given that there may still be some time before we know for sure whether a deal will be in place before the UK formally leaves the EU, there is a risk growth slows as businesses and consumers grow more cautious.”