Merkel to Quit as Party Chief as Her Chancellorship Wobbles 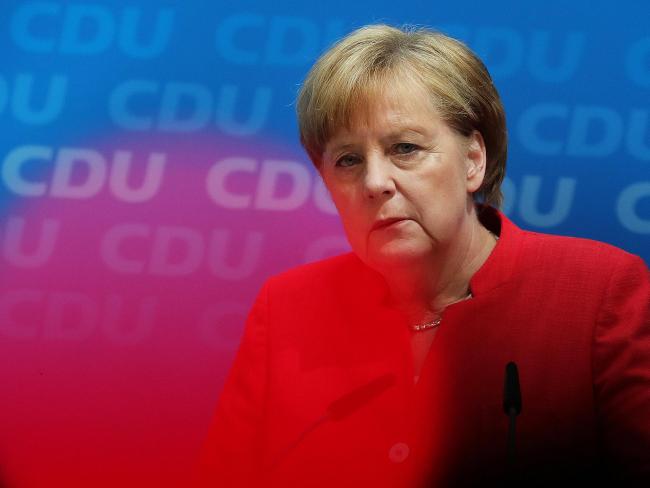 © Bloomberg. Angela Merkel, Germany’s chancellor and leader of the Christian Democratic Union (CDU) party, pauses while speaking during a news conference at the CDU headquarters in Berlin, Germany, on Monday, June 18, 2018. Merkel has accepted a two-week deadline over tougher migration policy set by Interior Minister Horst Seehofer, who leads her Bavarian coalition partner, according to a person familiar with the matter. Photographer: Krisztian Bocsi/Bloomberg

(Bloomberg) — German Chancellor Angela Merkel will quit as head of her Christian Democratic party after almost two decades, a person familiar with the matter said, a dramatic sign of her waning authority that will raise questions about her staying power as chancellor.

The unexpected reversal by Merkel, 64, signals the beginning of the end of an era during which her command of Germany put its stamp on Europe and beyond for more than a decade. Even so, Merkel’s term as chancellor runs until 2021 and Merkel has said she intends to serve it out. She is scheduled to speak to the media at 1 p.m. local time on Berlin.

The chancellor told a leadership meeting of her Christian Democratic Union on Monday that she won’t run again as party chairwoman at a convention in December, according to the person, who asked not to be identified because the meeting was closed.

Market reaction was muted with the euro remaining above last week’s low against the dollar on the news, which followed setbacks for Merkel’s CDU-led bloc in regional elections this month. Merkel herself blamed the losses on infighting in her national government.

After 18 years as party chief, the move throws open the succession race for a post that has traditionally has been the springboard for CDU chancellors.

Others include two state premiers Armin Laschet and Daniel Guenther, who carry weight after recently leading the CDU to victory in regional elections.

Yet the potential for change in Germany is hemmed in by the country’s constitution and relatively strong political center.

“Even if Merkel were to be replaced and/or if a new government were to take power in Berlin, with or without new elections, it would not make a major difference once the dust has settled,” Holger Schmieding, chief economist at Berenberg, said in a note. “Any conceivable coalition in Berlin would still be dominated by the mainstream parties CDU/CSU, SPD, Greens and the smaller Liberals.”