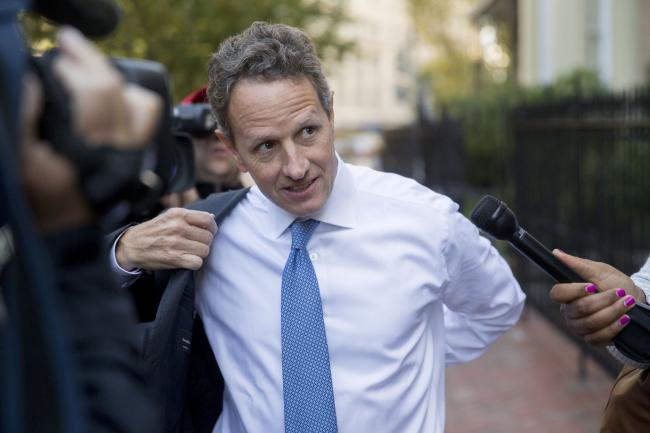 (Bloomberg) — U.S. Treasury Secretary Steven Mnuchin is set to snatch from Timothy Geithner the mantle of selling a record amount of notes and bonds as he seeks to finance America’s growing budget deficit.

Many strategists at primary-dealer firms predict that the Treasury will increase coupon-bearing debt sales at the quarterly refunding announcement on Oct. 31, likely taking the total amount of 3-, 10- and 30-year securities being offered at sales next week to an unprecedented level. Many also see issuance remaining skewed more heavily toward debt that matures in five years or less.

The previous high for so-called refunding sales was $81 billion, set by Geithner about nine years ago as America was recovering from the Great Recession. This time around, the ballooning budget shortfall is being fueled by tax reductions, spending hikes and an aging population rather than a dire economy, and the unemployment rate has in fact fallen to the lowest in nearly half a century.

“Deficits aren’t going anywhere and Treasury will need to continue to ramp up issuance,” said Jon Hill, an interest-rate strategist at BMO Capital Markets. “They’ll stay focused on the front-end given their stated guidance of trying to maintain a broadly constant weighted-average maturity of their outstanding portfolio.”

America’s borrowing needs pushed the budget gap to a six-year high in the latest fiscal year. At the same time, support from the Federal Reserve is waning, with the central bank shrinking its balance sheet and choosing not to replace its holdings of some Treasuries as they mature. On top of that, rising interest rates are hoisting the cost of financing the country’s more than $15.3 trillion debt pile.

The U.S. budget deficit grew to $779 billion in the 2018 fiscal year ending Sept. 30, a 3.9 percent share of total economic output and a 17 percent increase from the prior 12-month period. The Congressional Budget Office forecasts the gap will reach $973 billion in fiscal 2019 and exceed $1 trillion the next year.

Some though are predicting that the Treasury will do a few things different. That includes George Goncalves of Nomura Securities, who says the government may extend the out-sized increases to the seven-year maturity. Mike Schumacher, head of rates strategy at Wells Fargo (NYSE:) Securities, predicts the Treasury will nearly mirror changes from August, but one change he does see is an increase of $2 billion apiece in the size of 10-year auctions, both for the first issue of the quarter and reopenings of the security.

Dealers also foresee another $1 billion boost over the quarter to floating-rate securities. In addition, Treasury will lay further groundwork for a likely addition next year of a five-year Treasury inflation protected security, or TIPS, sale to their calendar, many say. Treasury currently has one new issue of five-year TIPS auction in April followed by two re-openings.

“Treasury has been preparing the market for the new five-year TIPS auction date that they have said they are going to add,” said Jonathan Cohn, head of rates trading strategy at Credit Suisse Securities (USA) LLC.

Yet Secretary Mnuchin might not have to boost auction sizes for that much longer.

Goldman Sachs Group Inc (NYSE:). this month cut by $50 billion its deficit forecasts for fiscal 2019 and 2020, taking them down to $1 trillion and $1.125 trillion respectively, citing in part additional revenue from U.S. President Donald Trump’s import tariffs. Goldman strategist Alec Phillips wrote in an Oct. 23 note that this could mean that after one more round similar to last quarter, the market will see auction-size increases that are “more gradual going forward.”

The length of time that the Treasury chooses to keep lifting quarterly sales is important for bond market participants, because the new supply has been one of the tailwinds helping to buoy U.S. yields. The benchmark 10-year yield this month climbed as high as 3.26 percent, a level unseen since 2011, although equity-market volatility and drifting confidence in Federal Reserve tightening have since helped pull it back to around 3.09 percent Monday morning in New York.

Also key to the supply situation is the Fed’s reduction of its balance sheet, which lifts the amount of debt that the Treasury needs to sell to the public. In its regular survey of dealers ahead of the refunding announcement, the Treasury asked for views on how long the Fed would keep shrinking its portfolio. The central bank’s balance sheet swelled in the wake of the 2008 financial crisis as the Fed added stimulus with direct bond purchases, but it is now allowing as much as $30 billion in Treasuries to mature without being reinvested each month.

Priya Misra, head of global rates strategy at TD Securities, forecasts that the Fed will stop running off Treasuries by December 2019 at the latest. Given that, she predicts growth in auction sizes will end following another increase at the February announcement.

Citigroup’s Steve Kang says no additional increases in auction sizes will be needed this fiscal year after those announced this week. Strategists at Barclays (LON:) Plc say the same.

Morgan Stanley (NYSE:) interest-rate strategists including Matthew Hornbach align with that view, seeing a halt to increases until 2020 if there’s a bump up at this week’s announcement, according to an Oct. 26 note. On top of that, they even see a 40 percent chance that the Treasury surprises investors by opting not to bolster sizes this time around.

Borrowing this year is on track to more than double from 2017 to $1.34 trillion, according to Treasury data published Monday. The department expects to issue $425 billion in net marketable debt from October through December, lower than the $440 billion estimated in July, according to a statement released in Washington. The Treasury sees an end-of-December cash balance of $410 billion, compared with its previous forecast of $390 billion.

“The backup in yields we’ve already seen shows the market is concerned about a lot of supply coming,” TD’s Misra said. “Treasury could, to prevent the market from getting too spooked, say we don’t anticipate too many more auction increases. But the big question mark for Treasury is what the Fed does with their portfolio runoff.”