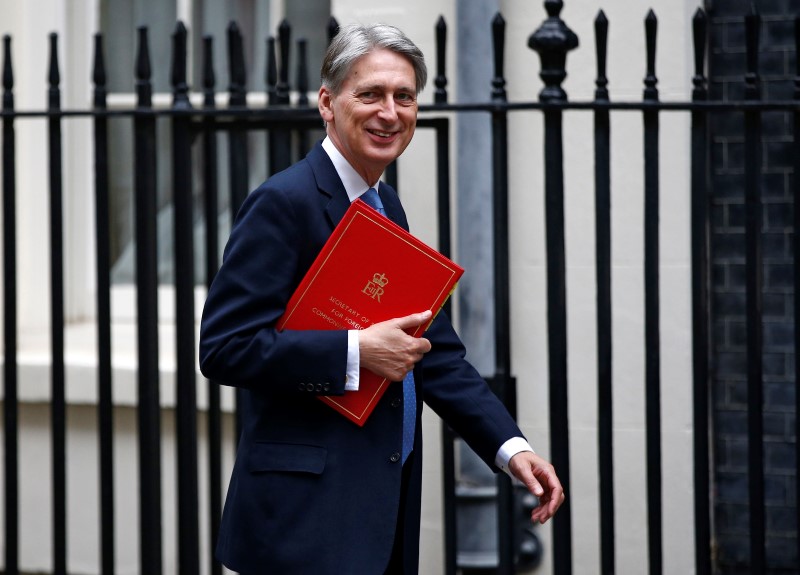 LONDON (Reuters) – Finance minister Philip Hammond’s budget plans show Britain is not serious about its goal of wiping out its budget deficit by the mid-2020s, the Institute for Fiscal Studies (IFS) said on Tuesday.

Hammond unveiled the biggest discretionary loosening of the public finances since the economic crash on Monday, as he tried to make good on Prime Minister Theresa May’s promise that years of austerity were ending.

The IFS said it was debatable whether the budget heralded the end of austerity, but it added that the plans marked a change of fiscal direction for Britain.

“Any idea that there is a serious desire to eliminate the deficit by the mid 2020s is surely for the birds,” IFS director Paul Johnson said.

The non-partisan IFS’s commentary on British budgets is closely watched by politicians and media.

Before the budget, it warned that tax rates would need to rise to their highest since just after World War Two if Hammond were to end real-terms cuts on public services spending and significantly reduce public debt as a share of national income.

Monday’s budget forecasts showed that Hammond was spending most of an unexpected tax windfall this year, rather than putting it towards reducing debt faster.

Johnson described the budget as a gamble for Hammond, given the possibility that the public finances could deteriorate next year.

In that case, the government would be very unlikely to pass tax rises through parliament, meaning spending promises would need to be financed out of the deficit.

Earlier on Tuesday, when asked if the extra spending was preparation for an early election after Britain leaves the European Union in March next year, Hammond said: “I hope not.”

The government forecasts Britain’s budget deficit this year will be its lowest since 2001/02 at 1.2 percent of GDP, before rising to 1.4 percent in 2019/20. Public sector net debt is seen falling slightly to 85.0 percent of GDP, after more than doubling after the financial crisis.