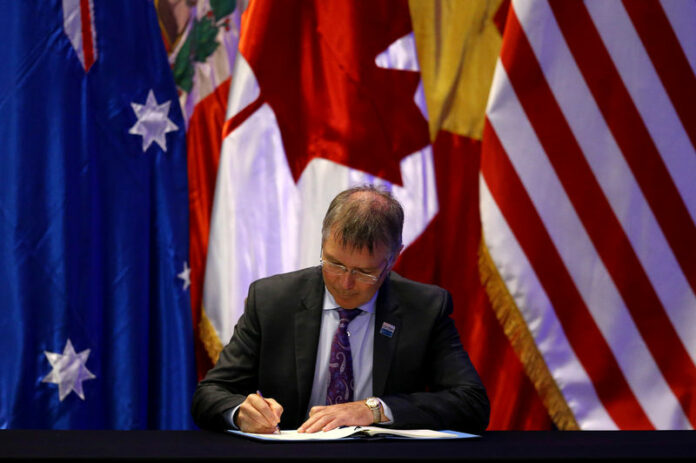 WELLINGTON (Reuters) – A landmark 11-member deal that will slash tariffs across much of the Asia-Pacific will come into force at the end of December, New Zealand said on Wednesday, a rare bright spot for global commerce as the U.S.-China trade war intensifies.

The deal moved forward after Australia become the sixth nation to formally ratify the deal, alongside Canada, Japan, Mexico, New Zealand and Singapore.

The deal will reduce tariffs in economies that together amount to more than 13 percent of global gross domestic product (GDP) – a total of $10 trillion. With the United States, it would have represented 40 percent.

“As protectionist moves strengthen across the world, the importance of free and fair rules is growing more and more,” Japanese Economy Minister Toshimitsu Motegi told a news conference in Tokyo.

He added that Japan would continue be “a flag-bearer for free trade.”

The success of the deal has been touted by officials in Japan and other member countries as an antidote to counter growing U.S. protectionism. They hope that Washington would eventually recommit to the pact.

Trump’s economic agenda, however, remains focused on China as a trade war between the world’s two largest economies shows little sign of abating.

Trump on Tuesday warned he is ready to impose additional tariffs on Chinese goods if an agreement with Beijing could not be reached.

The trade war threatens to check global economic growth, though signatories to CPTPP said the deal would be a boon for several sectors.

Australia said the agreement will boost agricultural exports, set to be worth more than A$52 billion ($36.91 billion) this year despite a crippling drought.

“One of the countries that will benefit the most is Peru,” said Vasquez.