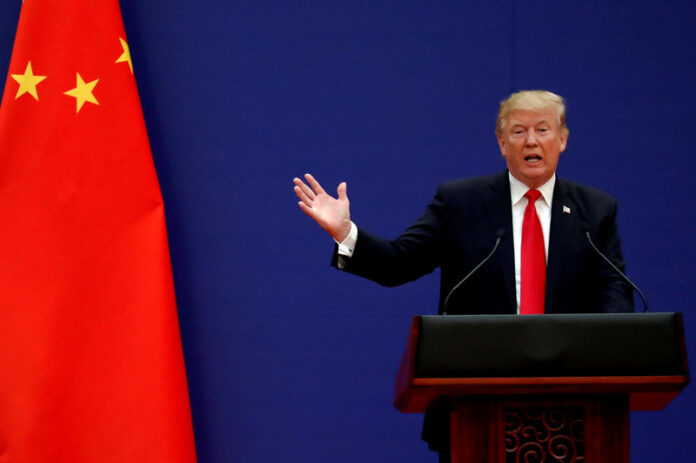 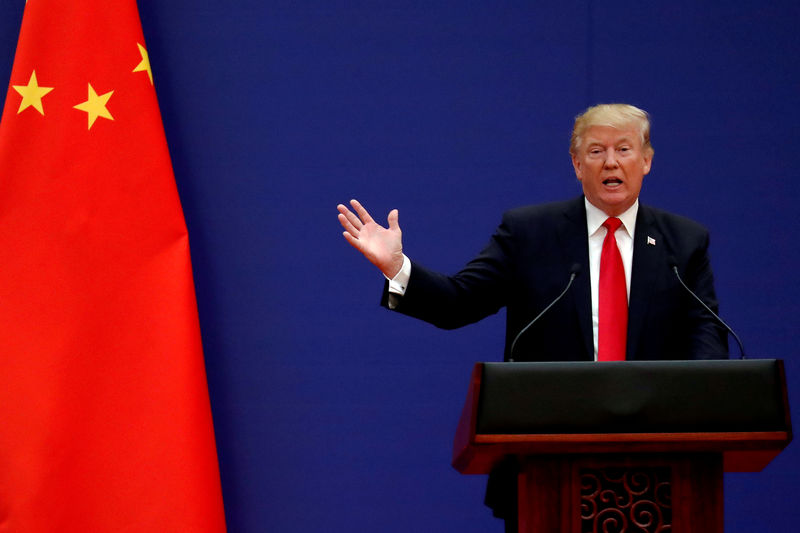 © Reuters. FILE PHOTO: U.S. President Donald Trump delivers his speech as he and China’s President Xi Jinping meet business leaders at the Great Hall of the People in Beijing

By Roberta Rampton and Susan Heavey

WASHINGTON (Reuters) – U.S. President Donald Trump said on Friday that he will likely make a deal with China on trade, adding that a lot of progress had been made to resolve the two countries’ differences but warning that he still may impose more tariffs on Chinese goods.

“We’ve had a very good discussions with China, we’re getting much closer to doing something,” Trump said before departing the White House for a campaign event.

“I spoke with President Xi (Jinping) yesterday. They very much want to make a deal,” Trump said. “I think we’ll make a deal with China, and I think it will be a very fair deal for everybody, but it will be a good deal for the United States.”

Trump said he will discuss trade with Xi when the two meet for dinner on the sidelines of the G20 leaders’ summit at the end of November in Buenos Aires, Argentina.

His administration has demanded that Beijing make sweeping changes to its policies on intellectual property protections, technology transfers, industrial subsidies and domestic market access, along with steps to reduce a $375 billion U.S. goods trade deficit with China.

Trump said a deal with China would also be good for Beijing.

“If we can open up China and make it fair, for the first time ever — this should have done years ago by other presidents but it wasn’t — I am very much willing to do it. But China very much wants to make a deal,” he said.

Trump’s comments came a day after a phone call with Xi that he described as “very good.”.

The president’s remarks helped U.S. stocks to trim their losses on a day that started with market optimism over a Bloomberg report quoting unnamed sources as saying that Trump had ordered his cabinet to draw up terms for a China trade deal.But by midday, shares had turned negative, weighed down by Apple Inc.’s (O:) disappointing earnings forecast and comments from White House economic adviser Larry Kudlow that he was less optimistic than previously about a deal between Washington and Beijing.

Kudlow, speaking on CNBC, contradicted the Bloomberg report and added: “There’s no mass movement, there’s no huge thing. We’re not on the cusp of a deal.”

Trump said that if a deal is not made with China, he could impose tariffs on another $267 billion in Chinese imports into the United States, adding that China’s economy had “been hit very hard” by previous U.S. tariffs.

The Trump administration also has taken action to hit the Chinese semiconductor industry, indicting two companies accused of stealing trade secrets and banning U.S. software and equipment exports to one of them.