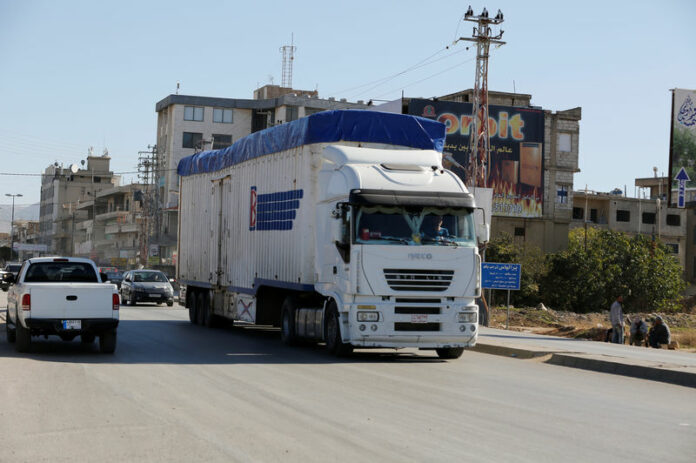 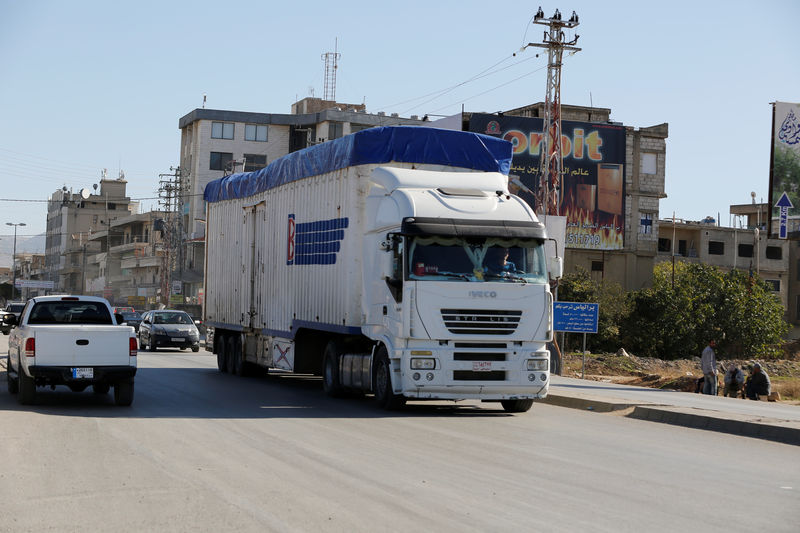 By Issam Abdallah and Jamal Saidi

MASNAA, Lebanon (Reuters) – Lebanese exporters hoping to send their goods to the lucrative Gulf market through the reopened Syrian-Jordanian border are grappling with higher Syrian customs duties and competition from producers who have taken their place.

The Oct. 15 reopening of the Nassib border crossing holds out the prospect of a much-needed boost for Lebanon’s economy, reviving a trade artery for the overland export of its fruit, vegetables and manufactured goods.

But at the Masnaa border, where hundreds of trucks used to cross into Syria each day, there is no sign yet of traffic recovering to the level that existed before the Syrian civil war erupted in 2011.

“They are saying the crossing is open. It is just talk,” said Mohamad Abdulrahman al-Bob, a fruit and vegetable merchant, speaking at his packing plant in the Bekaa Valley.

“The security is there, but it’s taxes, taxes,” he said, explaining why he has yet to send his goods overland.

The amount of goods he exports has halved from 2011 with all his exports today via sea or air.

The Nassib crossing was reopened after the Syrian government defeated rebels in the southwest in a Russian-backed offensive.

The Syrian government decided in September to increase customs duties on goods transiting through its territory, a decision aimed at providing support for Syrian seaports, state news agency SANA said.

Lebanon’s caretaker economy minister Raed Khoury said he had held talks with his Syrian counterpart to urge a reduction of the five-fold increase in the level of customs being applied by Damascus.

Lebanon’s ties with Syria are complicated by the state’s official policy of “disassociation” from regional conflicts. While some Lebanese leaders are urging a full normalization of ties, others oppose this.

Khoury said the two biggest problems obstructing a recovery of Lebanese exports are the competition from other countries and the fact that, cut off from export markets, many Lebanese producers had been forced out of business.

Before the Syrian conflict, Lebanon exported around $800 million worth of goods via Nassib annually, he said. Agricultural produce accounted for $200 to $300 million of the amount, with the rest being manufactured goods.

He estimates that around 40 trucks are entering Syria from Lebanon, compared to 400 a day before 2011.

The reopening of Nassib is seen as a rare chink of light in an otherwise bleak economic outlook. The World Bank said that Lebanon would likely benefit from it in a report that revised down the 2018 growth projection to 1 percent.

Revival of the export route can’t come soon enough for Wissam al-Samad, who owns a refrigerated warehouse stacked high with grapes. “When Lebanese goods disappeared from the Gulf market, foreign products replaced them,” he said.