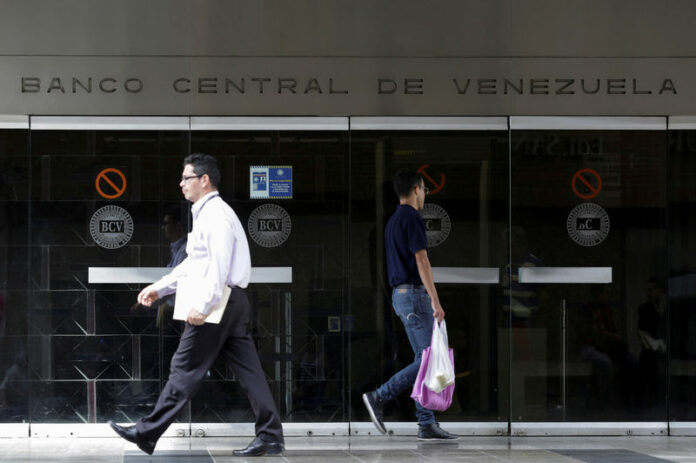 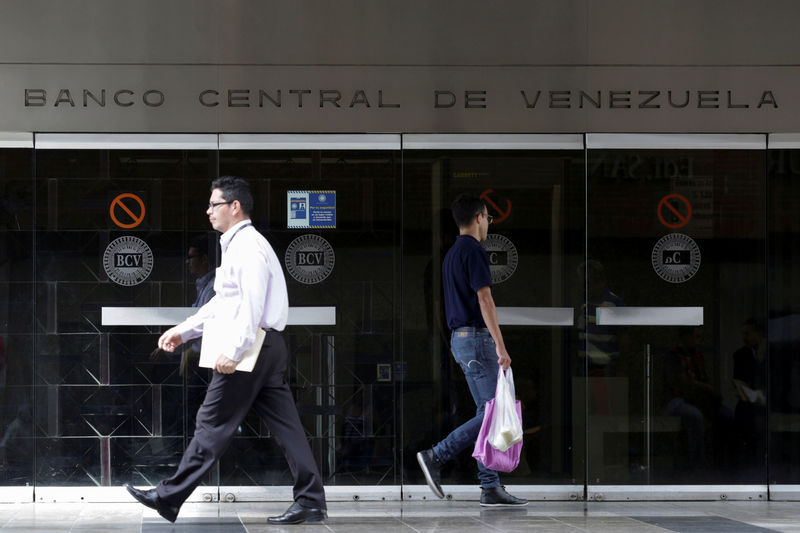 © Reuters. FILE PHOTO: People walk past an entrance of the Venezuela’s Central Bank in Caracas

CARACAS (Reuters) – Venezuela is seeking to repatriate about $550 million in gold bars from the Bank of England because of fears it could be caught up in international sanctions on the country, two sources with direct knowledge of the effort told Reuters.

The Trump administration on Thursday issued a new round of sanctions banning U.S. citizens from having dealings with anyone involved in “corrupt or deceptive” gold sales from Venezuela, as part of efforts to boost pressure on Maduro.

Maduro’s government is seeking to bring 14 tonnes of gold held in the Bank of England back to Venezuela, according to two public officials with direct knowledge of the operation, who asked not to be identified.

The Bank of England has sought to clarify what Venezuela wants to do with the gold, one of the officials said.

Venezuela’s central bank did not respond to a request for comment. The Bank of England declined to comment.

The plan has been held up for nearly two months due to difficulty in obtaining insurance for the shipment, needed to move a large gold cargo, one of the officials said.

“They are still trying to find insurance coverage, because the costs are high,” the official said.

Venezuela is in its fifth year of recession with annual inflation at more than 400,000 percent, leading to increased incidence of hunger and disease and spurring an exodus of some 2 million citizens.

Maduro says his government is victim of an “economic war” led by the opposition and fueled by Washington’s sanctions. His critics blame the country’s state-led economic model, stringent exchange controls and nationalizations of private companies.

Losing the gold would be a significant blow to the country’s finances. Lack of hard currency can create shortages of basic goods ranging from staple foods to drugs and automobile parts.

The amount is equivalent to five times the total hard currency that Venezuela has sold in 2018 via hard currency auctions that are carried out under the country’s 15-year-old exchange control system, according figures compiled by local consultancy Sintesis Financiera.

The government has promised to auction 2 billion euros in foreign exchange over an unspecified time frame, without saying where it plans to obtain those funds.

But even if Venezuela manages to repatriate the gold, the new U.S. sanctions could make selling it to raise hard currency difficult.

“If the government wants to carry out operations with the gold that it plans to bring, it would have to be done with allied countries because of the sanctions,” said Tamara Herrera, an economist with Sintesis Financiera.

Venezuela has been exporting gold to Turkey in the last year, a business that has grown as Maduro has built up ties with Turkish President Tayyip Erdogan.

Selling the gold directly from the Bank of England to a foreign buyer would be logistically easier than shipping it, but could also risk running foul of sanctions.

Venezuela for decades stored gold that makes up its central bank reserves in foreign bank vaults, which is common among developing countries.

The country’s late socialist leader Hugo Chavez, citing the need for Venezuela to have physical control of central bank assets, in 2011 repatriated around 160 tonnes of gold from banks in the United States and Europe to the central bank in Caracas.

But some of Venezuela’s gold remained in the Bank of England. Starting in 2014, Venezuela used this gold for “swap” operations in which global banks lent Venezuela several billion dollars with the gold as collateral.

Venezuelan central bank statistics show the central bank’s gold holdings by June this year had dropped to 160 tonnes from 364 tonnes in 2014, as some of the swap agreements expired without Venezuela returning the funds – leaving the gold in the hands of the banks.

In 2017, such swap agreements became difficult due to U.S. sanctions, which blocked U.S. financial institutions from bankrolling any new financing operations.