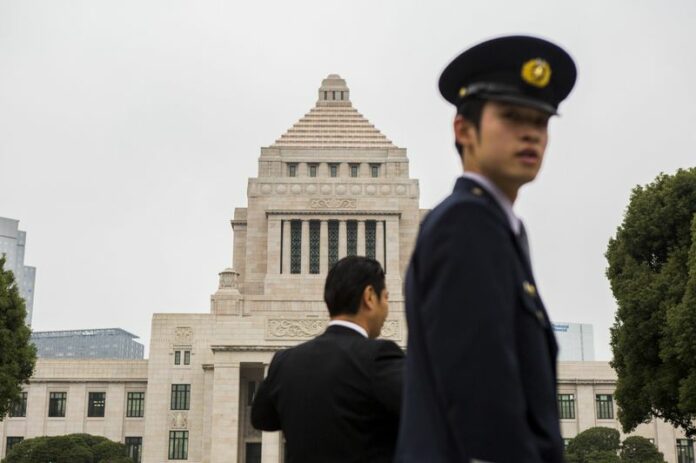 (Bloomberg Opinion) — If Haruhiko Kuroda is starting to lay the groundwork to trim Japan’s huge stimulus, he’ll be looking over his shoulder at two things: the world outside and a deceased predecessor.

The first issue for the Bank of Japan governor to watch is the international scene, which is getting tougher for central banks eyeing steps away from ultra-accommodation. Kuroda’s speech this week in Nagoya that hinted at policy normalization described a benign global growth outlook. It’s as though the weaker data of the past month and market gyrations never happened.

The second challenge is related to the first. One of his forerunners, Masaru Hayami, made a huge mistake in 2000 that Kuroda should learn from. So determined was Hayami to lift borrowing costs from zero and so intent was he to assert the BOJ’s new independence that he hiked into a global cycle that seemed superficially resilient. In reality, it was just months away from a downturn, courtesy of the dot-com bust. The central banker had to go into reverse after a few months and looked silly.

Hayami, who died in 2009, left his mark on the BOJ in a number of ways. It’s true that Hayami effectively deployed zero interest rates and quantitative easing, the practice of buying Japanese government securities to hold interest rates down to microscopic levels. But he made that one gigantic error. His miscue made his successors much more cautious.

Kuroda is too astute to make a rookie error like that. He’ll make sure that Japan’s bureaucratic apparatus is more or less behind him — or not hostile. He’s surely talking about tweaks, not an end, to quantitative easing or some move that makes borrowing costs restrictive.

He’s probably talking about some codified acknowledgement, perhaps together with the Ministry of Finance, that deflation has been beaten. He almost said it in Nagoya recently:

Over the past five years, Japan’s economy has clearly improved. Corporate profits have been at record highs, and the employment situation has improved substantially. Prices have improved steadily compared to five years ago, when the economy was suffering from deflation. Japan’s economic activity and prices are no longer in a situation where decisively implementing a large-scale policy to overcome deflation was judged as the most appropriate policy conduct, as was the case before.

The last sentence caught the most attention, though you only logically get to that once you see the ground covered in the first and its psychological import.

Kuroda also devoted attention to the plight of some lenders whose profits have been hurt by negative interest rates and years of quantitative easing. He didn’t see a crisis, but he did want his audience to hear that he’s on the case.

Last week I sketched some ways for Kuroda to take steps away from the heavy easing that’s characterized his five years at the helm. One of the side effects is that the central bank owns so many bonds that cobwebs are growing on trading desks.

Japanese markets didn’t react much to Kuroda’s speech. Perhaps they have seen so many false dawns, investors just tuned out. This could turn out to be one. They may also be focused on Congressional elections in the U.S. and clues on the future of the trade clash between Donald Trump and Xi Jinping.

It’s also true that whatever tiny steps Kuroda takes, easing will remain very substantial. That doesn’t mean he shouldn’t take them. But beware the global context and remember Hayami.