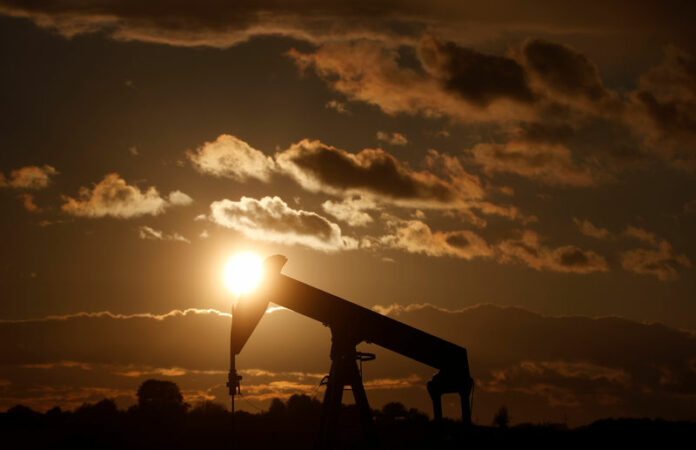 © Reuters. A pumpjack is seen at sunset outside Scheibenhard, near Strasbourg

SINGAPORE (Reuters) – Oil prices dipped on Monday as the start to U.S. sanctions against Iran’s fuel exports was softened by waivers that will allow some countries to still import Iranian crude, at least temporarily.

Front-month Brent crude futures (), the international benchmark for oil prices, were at $72.53 per barrel at 0030 GMT on Monday, down 30 cents, or 0.4 percent from their last close.

Brent has lost more than 16 percent in value since early October, while WTI has declined by more than 18 percent since then.

Traders said prices have been coming under pressure since it became clear that Washington was allowing several countries to continue importing crude from Iran despite the sanctions, which officially started on Monday.

The United States said on Friday it will temporarily allow eight importers to keep buying Iranian oil when it re-imposes sanctions, aimed at forcing Iran to curb its nuclear, missile and regional activities.

U.S. Secretary of State Mike Pompeo, who announced the decision, did not name the eight, which he referred to as “jurisdictions,” a term that might include importers such as Taiwan which the United States does not regard as a country.

China, India, South Korea, Turkey, Italy, the United Arab Emirates and Japan have been the top importers of Iran’s oil, while Taiwan occasionally buys cargoes of Iranian crude but is not a major buyer.

“All eyes will be on the outcome of negotiations on possible waivers to U.S. sanctions on Iran. Any deals allowing oil importers to continue buying from Iran could see prices come under further pressure,” ANZ bank said on Monday.

Oil markets have already adjusted to the Iran sanctions, gradually dialling back imports in preparations.

“Iranian exports and production had been declining steadily in advance. Market surveys of Iranian exports show a decline of more than 1 million barrels per day (bpd) as of October from May,” Edward Bell, commodity analyst at Emirates NBD bank said.

On the demand side, Bell warned that consumption may be slowing due to an economic slowdown, as seen in a sharp drop in refining profits for key fuels like gasoline.

“Sagging refining margins at a time of weak crude prices sends a very telling message to us that demand is underperforming,” he said.