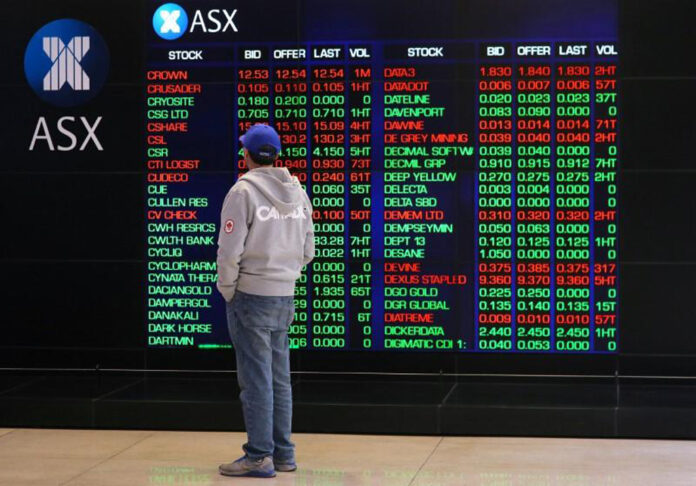 Australian energy stocks saw some respite after oil prices bounced overnight after days of losses, which were driven by ramped up output from major producers Saudi Arabia and Russia and on demand worries. Oil came under pressure again in Asian trade Tuesday.

The energy sector managed to rebound 1.4 percent after declining over the past three sessions, with the nation’s No. 2 independent gas producer, Santos and Woodside Petroleum Ltd adding nearly 2 percent each.

Material stocks took heart from upbeat news out of China, Australia’s largest trading partner, with the sub-index up about 1 percent.

Financial stocks were also up 0.6 percent with the country’s top two lenders rising about 1 percent each.

Commonwealth Bank of Australia gained after its joint bid to buy Property Exchange Australia Limited (PEXA) was accepted by shareholders holding a majority of the online property settlements firm’s shares.

“Banks are moving into the housing sector in the long run. It makes sense for CBA to take a bigger holding,” said Mathan Somasundaram, Market Portfolio Strategist at Blue Ocean Equities

Link Administration Holdings Ltd, which is part of the consortium with CBA, gained 1.8 percent for its biggest gain in about three weeks. In separate statement, it added that the consortium would pay A$1.6 billion ($1.15 billion) for PEXA.

Analysts at Jefferies, while noting challenges for banks, kept Westpac as its top pick in the sector as it sees “more upside to earnings versus peers in the longer term from further simplification and productivity gains.”

Investors will also be looking for any policy cues from the Reserve Bank of Australia’s meeting later in the day, where it is widely expected to keep rates steady and stay sidelined well into next year, a Reuters poll showed.