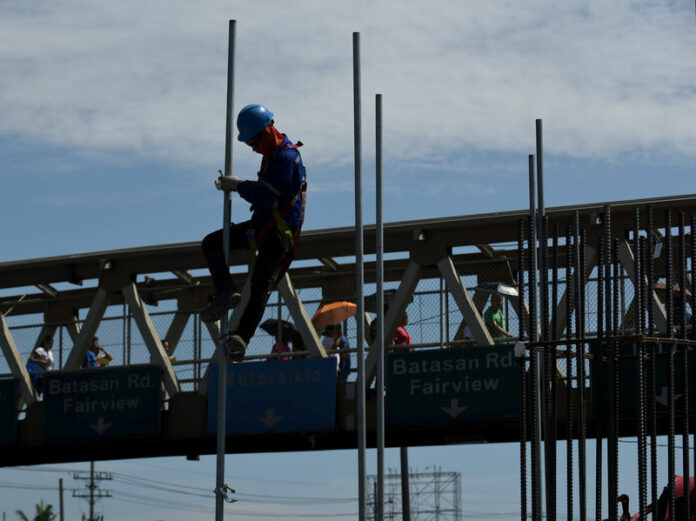 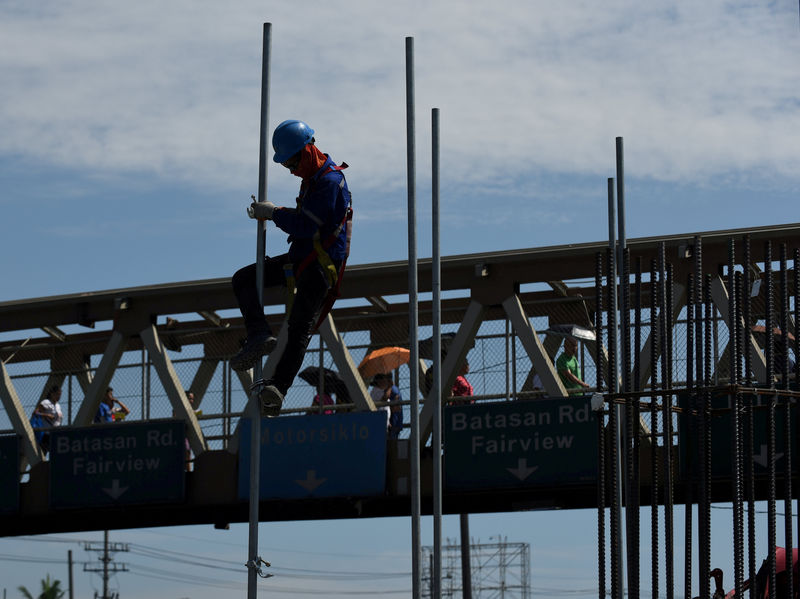 © Reuters. FILE PHOTO: A worker assembles a pole at a construction site of the Metro Rail Transit (MRT)

MANILA (Reuters) – The Philippine economy grew at its slowest pace in three years in the third quarter, casting doubt over the government’s full-year growth target and making it less likely the central bank will immediately tighten policy to tame inflation.

The Southeast Asian economy expanded 6.1 percent in July-September period, the statistics agency said on Thursday, weaker than the previous quarter’s upwardly revised 6.2 percent growth and below the 6.3 percent median forecast in a Reuters poll.

It is the weakest growth since the second quarter of 2015 when gross domestic product rose 6.0 percent.

The moderation reflects weak exports, as U.S. and Chinese demand slowed, and softer household spending as higher prices weighed on consumption. Farming output also weakened due to the impact of strong typhoons on crops.

“The slowdown in household spending is deemed to be abatable and temporary, but we can only do so much,” Economic Planning Secretary Ernesto Pernia said in a briefing following the data.

“With this, the Philippines needs to expand by at least 7 percent in the fourth quarter to attain the low end of the government’s target of 6.5-6.9 pct growth rate for the whole of 2018,” Pernia said.

The third quarter slowdown suggests the central bank may refrain from an immediate tightening of monetary policy, economists said. The Bangko Sentral ng Pilipinas holds its next policy meeting on Nov. 15.

ING senior economist Nicholas Mapa expects the BSP will now hold back from further interest rate hikes. He has revised out a previous quarter of a percentage point rate hike forecast for the Nov. 15 meeting.

To slow inflation to within its 2-4 percent target band next year, the BSP has raised interest rates at its last four meetings by a total of 150 basis points, bringing the benchmark rate

“Holding off on an additional rate hike, as marginal as it may be, would give the Philippine economy the breathing room it needs to catch its breath and resume its above 6 percent growth trajectory in 4Q,” Mapa said.

Agricultural production dropped 0.8 percent from a year earlier in July-September, the first contraction in seven quarters, while exports fell 2.6 percent in September after an average 2 percent growth in the three previous months.

On a quarterly basis, the economy grew 1.4 percent in July to September, slower than the June quarter’s upwardly revised 1.5 percent expansion.

Soaring consumer prices have prompted the Philippines to shave its GDP growth target for this year to 6.5-6.9 percent from 7-8 percent previously and raise its inflation forecasts for this year and next.

Data released on Tuesday showed annual inflation at 6.7 percent in October, unchanged from the previous month which was the highest in nearly a decade.