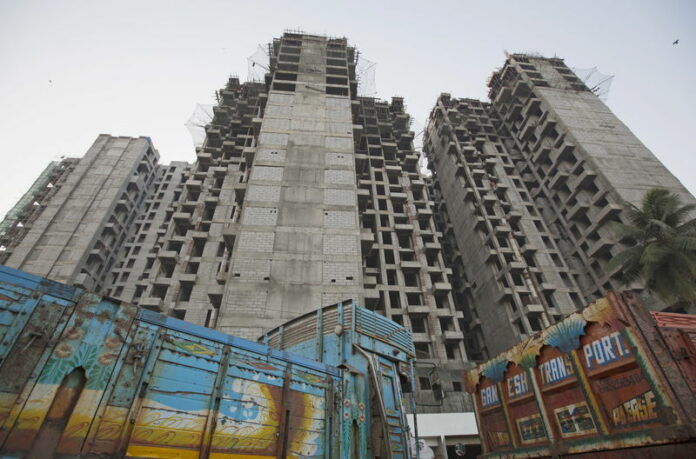 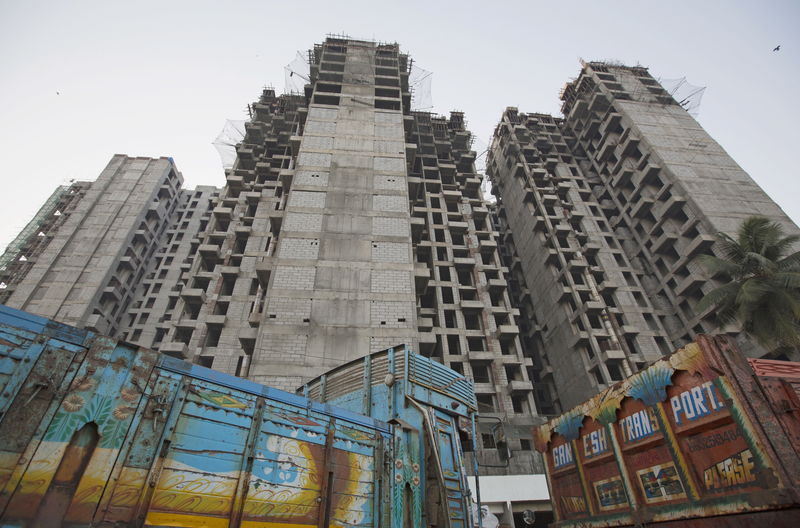 © Reuters. Trucks are parked at the site of an under-construction residential building project, which has been stalled, in Mumbai

By Vivek Mishra and Hari Kishan

BENGALURU (Reuters) – India house prices will rise at half the rate of consumer price inflation next year, hit by dwindling credit supply, according to a Reuters poll of housing market experts who said Delhi, the national capital, will be hit hardest.

House prices have risen at almost double-digit rates for over a decade in a country of 1.3 billion people, where for many, owning a home is still a dream. Major cities in India have become some of the most densely populated in the world.

Asia’s third-largest economy is also grappling with a liquidity crunch after a large lending firm, Infrastructure Leasing and Financial Services (IL&FS), defaulted on a short-term debt payment in June.

The Reserve Bank of India and the government have since tussled over tight liquidity. The government has blamed the central bank and has asked it to ease lending regulations for banks and financial firms.

Rising bad debts and non-performing assets have made major banks and other large financial institutions cautious on lending, leading to a slowdown in the property market, which relies heavily on borrowing for both home building and buying.

“The liquidity crunch is likely to continue in 2019 and push (house) price growth to an all-time low. It will also lead to a scarcity in funds, pushing home loan interest rates higher,” said Anuj Puri, chairman of ANAROCK property consultants.

“And thus, NBFCs (non-banking financial companies) and other commercial banks will be alert over further loan disbursements until normalcy returns to the market. This has created a deep-rooted problem. Only the fittest can survive,” he said.

Puri also added the lack of credit “will be worse” for the housing market and smaller real-estate firms than the impact from the high-value currency ban two years ago and the hasty implementation of a goods and services tax last year.

The Reuters poll of 14 property market experts, conducted Oct. 29-Nov. 14, showed they expected national house prices to rise 2.8 percent this year and 2.0 percent next, around half the rate of the current and expected rate of consumer price inflation.

While the consensus is based on different measures, a majority in the poll provided their forecasts based on NHB Residex. The common theme across forecasts irrespective of the methodology clearly shows a sluggish pace of house price growth over the next year.

A regional breakdown shows a much worse picture for Delhi.

House prices in Delhi, including the National Capital Region, home to 20 million people, are forecast to fall 2.0 percent this year and 2.5 percent next.

“Frankly speaking, Delhi’s real estate is highly overvalued; there are no fundamental (reasons) to prevailing prices and dynamics. Fifty-five percent of properties built in the last decade were in unattractive locations, which simply had no takers,” said Pankaj Kapoor, managing director of realty consultancy Liases Foras.

“Apart from that, the increasing pollution really suggests doom for the market in Delhi. Water scarcity, pollution and floods are major factors which will impact prices and valuations over the coming years.”

Property prices in Mumbai, India’s financial capital, were expected to stagnate this year and next. For Bengaluru and Chennai, the median forecast was for house prices to gain between 1 percent and a little over 2 percent in the next year.

High prices are deterring new buyers across most Indian cities, on top of rising interest rates and an economy that is now cooling.

When asked to rate the real estate market nationally, 11 of 14 analysts said it was “overvalued” relative to economic fundamentals.

Delhi and Mumbai were either “overvalued” or “extremely overvalued”, according to a majority of respondents. But 10 of 13 analysts said homes in Bengaluru and Chennai were “fairly priced”.

“Most markets, except Bengaluru, have seen a pronounced fall in demand due to lower affordability,” said Arvind Nandan, executive director of research at Knight Frank India.