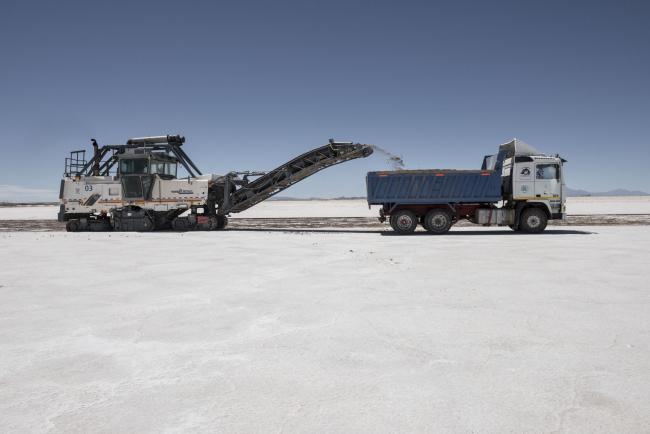 © Bloomberg. A machine loads soil into a truck during the construction of new industrial evaporation pools inside the Salar de Uyuni (Uyuni Salt Flats) in Potosi, Bolivia, on Saturday, Dec. 10, 2016. Bolivia has the largest lithium deposits of any country, which are estimated to be about half of the world’s supply. Photographer: Marcelo Perez del Carpio/Bloomberg

(Bloomberg) — High prices for lithium and cobalt will hinder sales growth in battery-powered vehicles the next few years, according to HSBC Holdings Plc (LON:).

Global market share by 2025 for fully electric vehicles will be lower than previously projected — 9.4 percent, compared with an earlier estimate of 10.5 percent, HSBC analysts Alexandre Falcao and Augusto Ensiki said in a report. At the same time, they doubled their forecast for plug-in hybrid EVs to 5.5 percent of the market by 2025, from 2.4 percent.

“High lithium and cobalt prices – but also limited supply and lower demand for pure EVs -– now favor more plug-in hybrids in the short to medium term vs. our previous expectation,” the analysts said in the report.

Lithium supply will remain “reasonably tight” amid new-output delays, canceled and shelved projects, robust battery demand globally and a continued push by China’s government for electric vehicles, according to the report. HSBC raised its 2025 lithium-demand forecast by 88 percent from its last estimate more than a year ago, to 776,000 tons.

The inflection point for EV adoption will be around 2020, when battery costs should have fallen “significantly” and major auto companies will start selling their new EV models, HSBC said.

Established lithium producers SQM and Livent Corp. are the best stocks to gain exposure to demand increases, HSBC said. Glencore (LON:) Plc and Vale SA are also set to benefit, as they produce other battery materials such as nickel, and cobalt, according to the report. HSBC upgraded SQM’s rating to a buy and raised its price target to $55 a share from $50. It also initiated coverage of Livent with a buy rating and a price target of $22 a share, and gave Albemarle Corp. a hold rating and a price target of $112.50.