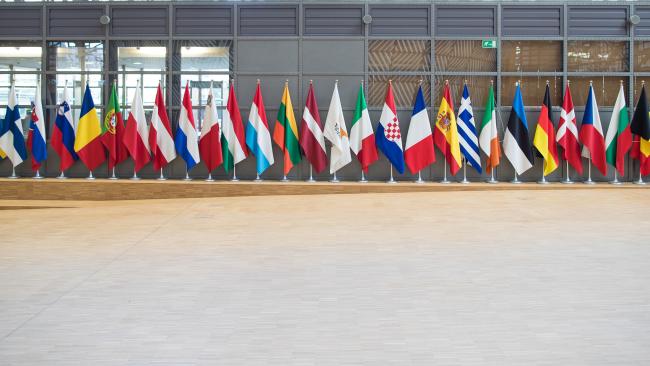 © Bloomberg. The twenty eight European Union (EU) members\’ national flags, including the U.K.\’s Union Flag, also known as Union Jack, left, hang from poles inside the EU\’s new Europa building, also known as the Space Egg, ahead of a Eurogroup meeting of euro-area finance ministers in Brussels, Belgium, on Thursday, Jan. 26, 2017. Greece has less than a month to iron out disagreements with its creditors over how to move forward with a rescue package that has been keeping the country afloat since 2010.

(Bloomberg) — Euro-area finance ministers gather in Brussels on Monday for their final meeting on buttressing the currency bloc before passing the baton to their leaders, who are expected to strike a deal later this month.

“I don’t think the European countries are living through a period of particularly excellent economic welfare otherwise we wouldn’t have had Brexit,” Italian Deputy Premier Matteo Salvini said during a Politico conference in Brussels.

“The basics of the budget won’t change: the pension overhaul, the reforms of the work conditions,” Salvini said. “I don’t think we’re aiming toward a collision; it’s not in our interest, it’s not in Europe’s interest.”

EU governments will back the European Commission’s assessment that Italy’s budget is in serious breach of the bloc’s fiscal rules, according to a draft of their communique to be issued later on Monday. But the wording is careful, and ministers will also express their support to continuing dialogue between Brussels and Rome, while avoiding any mention of financial penalties, according to the draft seen by Bloomberg.

The European Commission is set to unveil plans for challenging the dollar’s dominance in global markets, including energy, as a widening rift in transatlantic ties leaves the bloc exposed. According to a draft of proposals due to be released later this week by the EU’s executive arm, the bloc must develop “a full range of trustworthy interest rate benchmarks” in financial markets, and a fully integrated instant payment system. The Commission will also propose using the euro as default currency in energy contracts agreed between EU member states and third countries, documents seen by Bloomberg show.

There’s a widening consensus about having a eurozone budget, but there’s still some opposition on the idea of “stabilization,” French Finance Minister Bruno Le Maire told reporters.

Luxembourg Finance Minister Pierre Gramegna said he’s “very optimistic” that finance ministers will reach a compromise on Tuesday on the banking package. “The package that we have on the table is extremely wide and covers most of the topics we’ve been fighting about or talking about for 18 months,” he told reporters in Brussels. “I see the light at the end of the tunnel.”

European Commissioner Pierre Moscovici says talks between the European Union and Italy “are not at the end of the road.”

“Proposals are going in the right direction but obviously the gap is still quite consistent, the gap between the Italian budget as it stands and the requirements of the stability and growth pact,” Moscovici says. “We need to fulfill that gap and this is why we still need to work together.”

European Commission Vice President Valdis Dombrovskis said he met with the Italian finance minister in Brussels on Monday and the European Union is now waiting for concrete moves from the government in Rome.

“It’s positive that the tone of the discussion has changed and we are engaging with the Italian authorities but it’s also of course necessary that there is a substantial adjustment to the 2019 budget,” Dombrovskis told reporters. “Now the ball is on Italy’s side to do adjustments to Italy’s budget.”

“We’re now talking about a tax on certain financial, even corporate transactions in terms of takeovers and things like that,” Overtveldt told reporters before the Eurogroup started. “I’m looking forward to see the details of it but it’s certainly something different than what we have been discussing so far on the issue of the FTT.”

German Finance Minister Olaf Scholz said ministers will discuss the financial transaction tax, a proposal that so far has failed to gain traction.

“There is a joint German and French path prepared, about which we will try to convince as many as possible,” Scholz told reporters before the meeting. “We’ll have to work a bit more but I believe it’s at least within sight how that could work.”

“I established in my talks in Rome a few days ago that the willingness to find a compromise is great and that’s also the right attitude,” Scholz said.