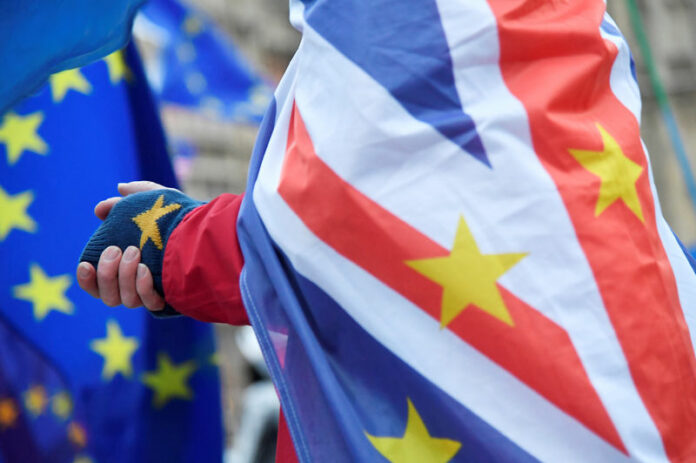 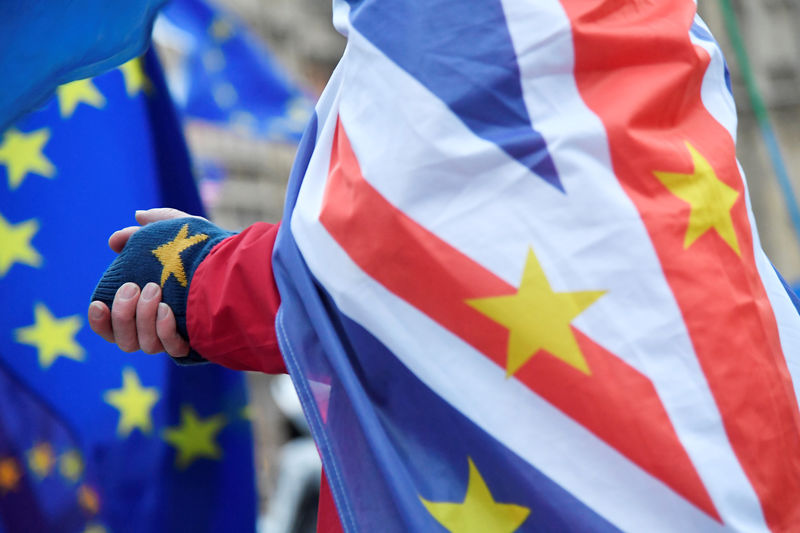 © Reuters. FILE PHOTO: An anti-Brexit demonstrator wears a combination of EU and Union flags outside the Houses of Parliament in London

LONDON (Reuters) – British Prime Minister Theresa May will urge parliament to back her EU divorce deal on Tuesday at the start of a five-day debate that could determine the future of Brexit and the fate of her own government.

May’s plan to keep close ties with the EU after leaving has been criticized by Brexit supporters and opponents alike, leaving her struggling to secure parliament’s approval in a vote that will follow the debate on Dec. 11.

If, against the odds, she wins the vote, Britain will leave the EU on March 29 under terms negotiated with Brussels – the country’s biggest shift in trade and foreign policy for more than 40 years.

If she loses, May could call for a second vote on the deal. But defeat would increase the chances of Britain leaving without a deal – a prospect that could mean chaos for Britain’s economy and businesses – and put May under fierce pressure to resign.

Defeat could also make it more likely that Britain holds a second referendum, three years after voting narrowly to leave the EU, or lead to Brexit not happening.

But the deal, sealed in Brussels last month, has united critics at both ends of the political spectrum: eurosceptics say it will make Britain a vassal state while EU supporters – expressing the same idea though with different language – say the country will become a rule taker.

Her allies in parliament, the Northern Irish Democratic Unionist Party which props up her government, have also rejected the deal and opposition parties say they cannot back it.

May is pressing on nonetheless.

“The British people want us to get on with a deal that honors the referendum and allows us to come together again as a country, whichever way we voted,” she will tell lawmakers on Tuesday, according to excerpts of her speech.

“This is the deal that delivers for the British people.”

Few in the House of Commons, the lower house of parliament, seemed convinced so far.

On Monday, her government’s bid to calm another row over the legal advice received on the deal did little more than inflame tensions in parliament. Her former Brexit minister David Davis said flatly: “This is not Brexit.”

JOB ON THE LINE

More than two years since Britain voted to leave the EU, the testy debates that shaped the referendum have increased, deeply dividing the country and increasing uncertainty over its future which has unsettled markets and businesses.

May hopes that if she forces her deal through parliament, those firms who have put off investment decisions and brought in contingency plans for fear of trade drying up will be able to move forward again.

She says her deal will offer close economic ties with the EU, enable Britain to trade freely with the rest of the world while meeting one of the demands of voters to end free movement and reduce immigration into Britain.

But the compromise deal, which ministers openly say is not perfect, has done little more than strengthen opposition at the hardline edges of the debate.

Brexit supporters have vowed to vote down the deal and threatened to bring May down. Pro-EU lawmakers have also said they will vote against it, and some, especially in the main opposition Labour Party, will also try to unseat her.

The DUP’s anger over the deal has even seen the socially conservative party support a bid by leftist Labour to bring contempt proceedings against the government.

May’s job looks to be on the line.

During the five-day debate, the strength of that opposition should become clear when lawmakers make speeches or try to amend, or change, May’s motion to approve the deal to try to alter or delay Brexit, or derail it altogether.

Labour has already submitted an amendment designed to ensure that the government cannot, under any circumstances, leave the EU without an exit agreement, and must consider all alternatives to doing so.

Pro-EU lawmakers have also put forward another amendment to block the deal and to rule out a no-deal Brexit.

But her team is sticking to the script.

“This deal … is the best way I firmly believe of ensuring that we leave the European Union on March 29,” Attorney General Geoffrey Cox told parliament on Monday.

“This is the deal that will ensure that happening in an orderly way with legal certainty.”