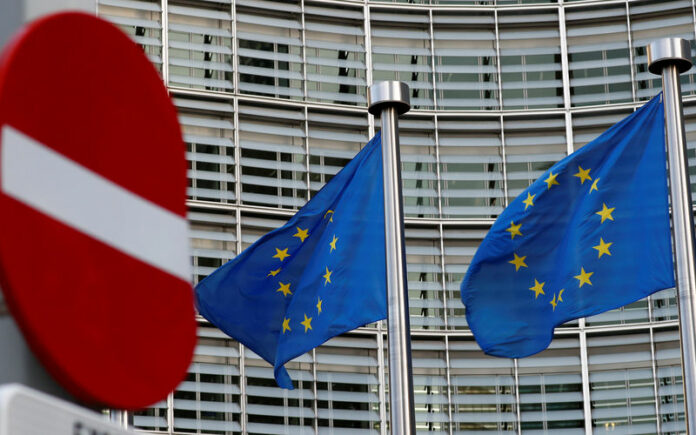 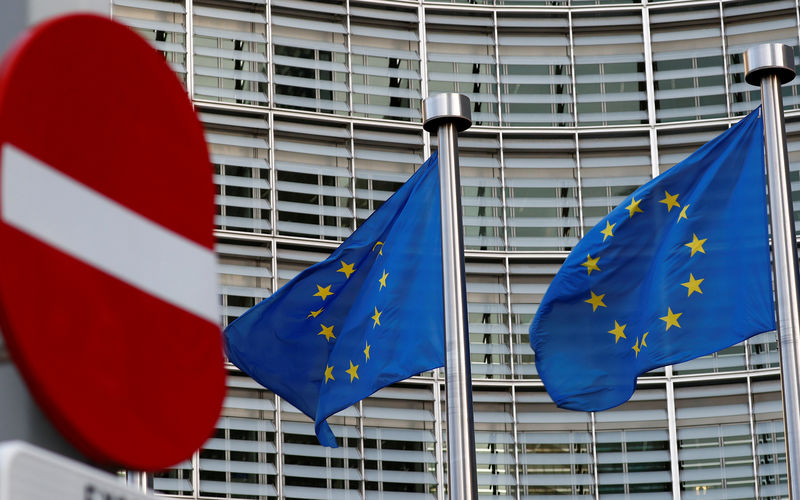 © Reuters. A street sign is seen near EU flags outside the EU Commission headquarters in Brussels

BRUSSELS (Reuters) – EU finance ministers agreed on Tuesday to give the euro zone ESM bailout fund new responsibilities, but delayed decisions on a euro zone budget and a deposit guarantee scheme after failing to reach agreement.

The ministers discussed deeper economic integration of the 19 countries sharing the euro to prepare the single currency bloc for the next potential crisis.

But after a year of negotiations, fraught with political difficulties, little of the original ambition, championed by French President Emmanuel Macron, remained.

“We have agreed to enhance the role of the ESM to further strengthen the crisis prevention and resolution capabilities of the euro area,” the chairman of euro zone finance ministers Mario Centeno told a news conference.

Two flagship ideas – a separate budget for euro zone countries and a European Deposit Insurance Scheme (EDIS) to make all euro zone bank deposits safe – proved too controversial and will be worked on further.

In the case of the deposit guarantee scheme, mistrust among euro zone countries is so great that they could not agree on a roadmap for beginning political negotiations, as mandated by EU leaders.

“More work is … needed on EDIS before we can agree on a roadmap to begin political negotiations. The news here is that we will establish a high-level working group with a mandate to work on next steps and report back in June 2019,” Centeno said.

The Macron idea of a large euro zone budget of hundreds of billions of euros, financed by dedicated taxes and national contributions to stabilize the euro zone in case of a crisis, was also shelved.

The ministers said that, if asked by EU leaders on Dec 14, they were ready to work on a Franco-German proposal of a euro zone budget for greater “competitiveness and convergence” of euro zone economies that would be part of the overall European Union budget. Its size would be determined by leaders.

There was no agreement to use such a budget for the stabilization of the euro zone through an unemployment insurance scheme.

The ministers agreed for the ESM bailout fund to lend to the euro zone bank resolution fund (SRF) in an emergency should a potential crisis use up all of the SRF’s resources.

The ESM loans would be available from 2024, or earlier, if a review in 2020 showed risks of bank collapse had fallen so much, that the backstop won’t be needed.

The ministers would also allow the ESM to lend to a euro zone government that conducts fundamentally sound policies but has been hit by an economic shock not of its own making.

But to be eligible for such a loan, the euro zone government could not break any EU budget rules, have sustainable debt and an economy that has no excessive imbalances.

To make debt restructuring easier, the euro zone will introduce single limb collective action clauses (CACs) by 2022, the ministers said in a statement.

Finally the ministers acknowledged the possibility of the ESM playing a role in a potential sovereign debt restructuring in the future, but dressed in a language that would limit its involvement to a minimum.

“When appropriate and if requested by the Member State, the ESM may facilitate the dialogue between its Members and private investors. This involvement would take place on a voluntary, informal, non-binding, temporary, and confidential basis,” the statement said.