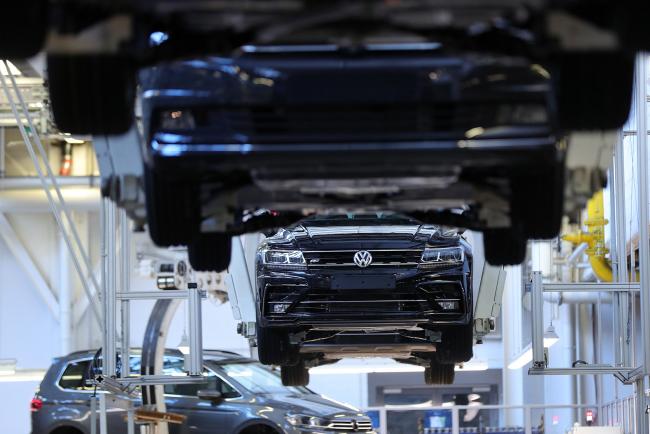 © Bloomberg. Cradles transport Volkswagen Touran R-Line Sport Utility Vehicles (SUV) on the assembly line at the Volkswagen AG (VW) factory in Wolfsburg, Germany, on Tuesday, Oct. 30, 2018. VW has managed one of the more confident outlooks in an otherwise gloomy reporting season for carmakers and suppliers.

(Bloomberg) — The White House is looking to whittle down a $30 billion automotive trade deficit with Germany with increased production in the U.S., Commerce Secretary Wilbur Ross said ahead of a meeting with automakers in Washington Tuesday.

Of the $65 billion trade deficit the U.S. has with Europe, about $30 billion is from trade with Germany for autos and auto parts. The goal is to reduce that deficit, “hopefully with increased production in the U.S.,” Ross said on CNBC.

Top executives of Volkswagen (DE:) AG, Daimler AG (DE:) and BMW AG have a balancing act to pull off when they meet with Trump administration officials about potential tariffs on U.S. imports from Germany.

The carmakers don’t want the U.S. to enact possible levies of as much as 25 percent on billions of dollars worth of cars they ship in from Germany every year. But they will be careful not to become entangled in negotiations that rest squarely in the hands of European Union trade officials, according to people familiar with the matter.

Ross acknowledged in the CNBC interview that automakers are investing in electric-car programs and encouraging production of those products in the U.S. is “one of the big objectives we have.”

BMW is mulling setting up a production site in the U.S. for engines and transmissions, and VW has been considering potential locations to make electric cars in North America, including at its existing plant in Chattanooga, Tennessee.

In 2020, VW plans to ramp up electric-car output at two factories in China. VW’s only U.S. car factory in Chattanooga is “first choice” to produce electric cars for the North American market, Thomas Ulbrich, the VW brand’s head of electric cars, said in making the announcement. Talks are ongoing with a final decision expected in a few weeks, he said. VW has a production network of some 120 plants.