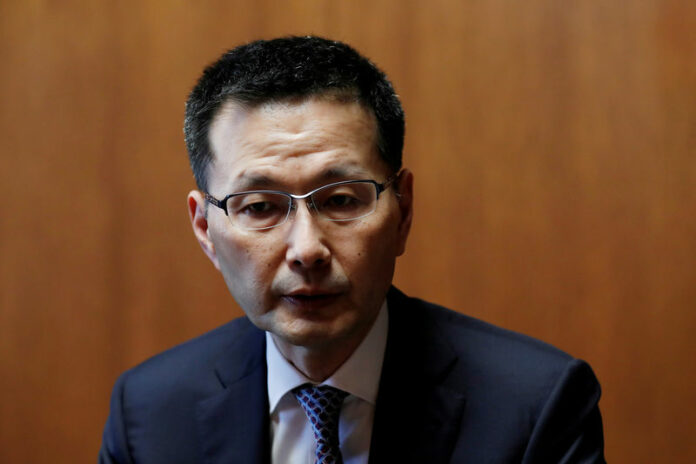 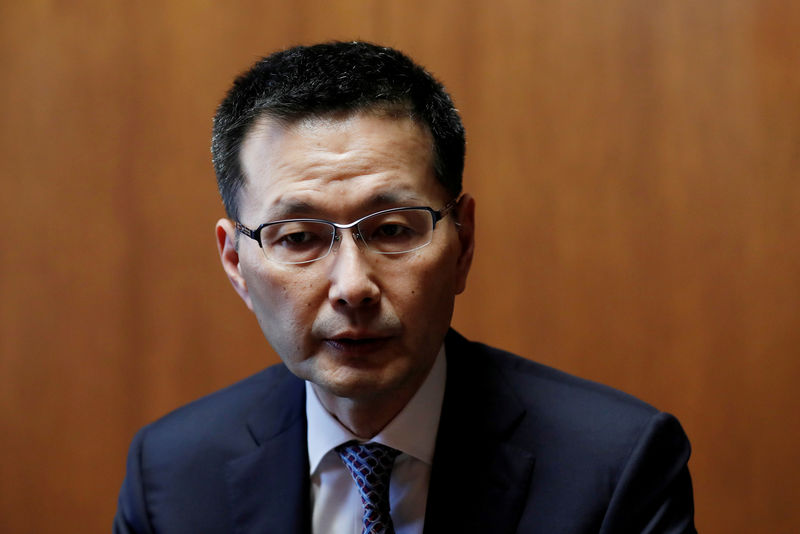 © Reuters. FILE PHOTO: Deputy governor of the Bank of Japan Masazumi Wakatabe speaks during an interview with Reuters in Tokyo

NIIGATA, Japan (Reuters) – Bank of Japan Deputy Governor Masazumi Wakatabe said on Wednesday the central bank should not hesitate to ramp up stimulus if risks to the economy threaten the achievement of its inflation target.

Wakatabe, a vocal advocate of aggressive monetary easing, also said the demerits of the BOJ’s ultra-loose policy have yet to outweigh the benefits, rebuffing calls for the central bank to whittle down its radical stimulus program.

“If necessary, the BOJ should ease policy further without hesitation,” Wakatabe said at a news conference after meeting business leaders in Niigata, northern Japan.

Warning that downside risks to the economy were increasing, Wakatabe said he would propose expanding stimulus “if the path toward achieving the price goal appeared to waver”.

“If additional easing becomes necessary, there is room to do so,” he said, countering market views that the BOJ has run out of ammunition to expand stimulus.

The remarks highlight a rift between those on the BOJ’s nine-member board who see room to boost stimulus, and those who are wary of the rising cost of prolonged easing.

Wakatabe said the central bank would be vigilant to the side-effects of monetary easing, as its huge bond buying dries up market liquidity and years of near-zero rates strain financial institutions’ profits.

But he stressed that the chance of Japan’s banking sector destabilizing was “very low” for now, as many financial institutions had sufficient capital buffers.

“I don’t think the demerits are materializing enough to warrant ending our large-scale stimulus program,” he said.

The central bank is now at a crossroads because it has been pursuing radical quantitative easing for more than five years with only mixed results.

Some BOJ policymakers have publicly voiced concerns over the rising cost of monetary easing, with one calling for further tweaks to the central bank’s policy framework.

Wakatabe said it was important to maintain the BOJ’s massive stimulus program to ensure the economy remains strong enough to nudge up prices and wages.

“Japan is only half way to achieving 2 percent inflation. If downward pressure is exerted on the economy again, it may revert to deflation,” Wakatabe said.

Japan’s economy shrank more than expected in the third quarter, hit by natural disasters and a decline in exports.

Some analysts warn an expected rebound in the current quarter could be weaker than expected as rising trade protectionism hurt business sentiment.

As an academic, Wakatabe had repeatedly called for stronger steps to drive up inflation. But he has toned down his demands for more stimulus since joining the BOJ board in March.

Under a policy dubbed yield curve control, the BOJ guides short-term interest rates at minus 0.1 percent and long-term rates around zero percent to achieve its 2 percent price goal.

Subdued inflation has forced the BOJ to maintain its huge stimulus program despite the rising costs, such as the hit to financial institutions’ profits from near-zero rates.

The BOJ took steps in July to make its policy framework more sustainable, such as allowing bond yields to move more flexibly around its target.