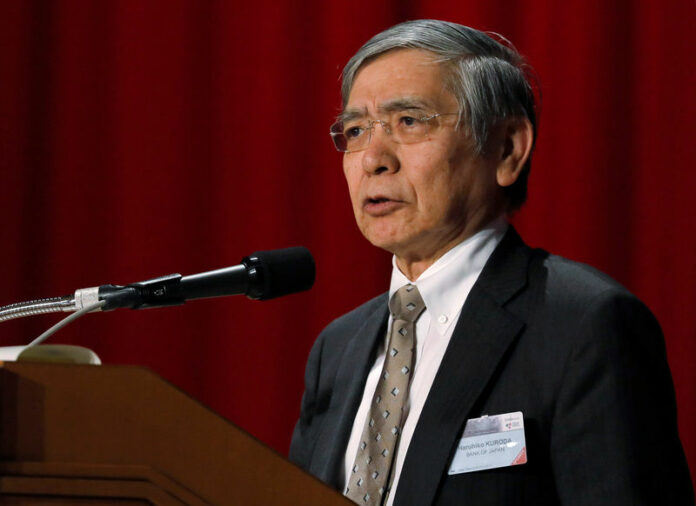 Given subdued inflation and various risks to the economic outlook, the central bank must maintain its massive stimulus program to underpin growth, Kuroda told parliament.

“Risks to Japan’s economy are tilted toward the downside. We need to pay particular attention to protectionist moves such as the Sino-U.S. trade friction,” Kuroda said on Thursday.

Stubbornly weak inflation has forced the BOJ to maintain its radical stimulus program despite the rising costs, such as the drain on financial institutions’ profits from years of near-zero interest rates.

Kuroda said the BOJ will “of course” exit ultra-loose policy when inflation approaches its 2 percent target. But he stressed that it was premature to reveal the strategy now as more time is needed to hit the price goal.

“We need to debate an exit strategy and explain it to markets but only when inflation approaches our target,” he said.

Under a policy dubbed yield curve control, the BOJ guides short-term rates at minus 0.1 percent and long-term rates around zero percent to achieve its 2 percent price goal.

Some BOJ policymakers have publicly voiced concern over the plight of regional banks, many of which are suffering losses in core lending operations due to years of near-zero rates, a dwindling population and a dearth of corporate fund demand.

Many Japanese financial institutions complain that the BOJ is narrowing their margins by keeping yields low and the yield curve too flat.

Kuroda said regional banks face “great challenges” that require reforms and investment in new financial services. But he said there were no immediate problems in Japan’s banking system that warranted a monetary policy response.

With inflation expectations showing little sign of picking up, the priority would be to keep the recovery going long enough so that wage and price growth will heighten, he said.

“We expect to keep rates low for quite a long time since inflation is only around 1 percent, and various uncertainties loom for the economy and prices,” Kuroda said.

Japan’s economy shrank in the third quarter and some analysts warn an expected rebound in the current quarter could be weaker than expected, as trade protectionism and slowing global demand hurt business sentiment.

Reflecting the darkening outlook, BOJ Deputy Governor Masazumi Wakatabe said on Wednesday the bank should not hesitate easing more if risks to the economy materialize.

Kuroda said the BOJ had tools to expand stimulus if needed, including cutting rates and expanding its asset purchases.

But he said maintaining the current ultra-easy policy should be enough for now, playing down the possibility of deploying additional stimulus any time soon.

“At present, we expect inflation to gradually accelerate toward 2 percent just by maintaining our current large-scale monetary easing program,” he said.