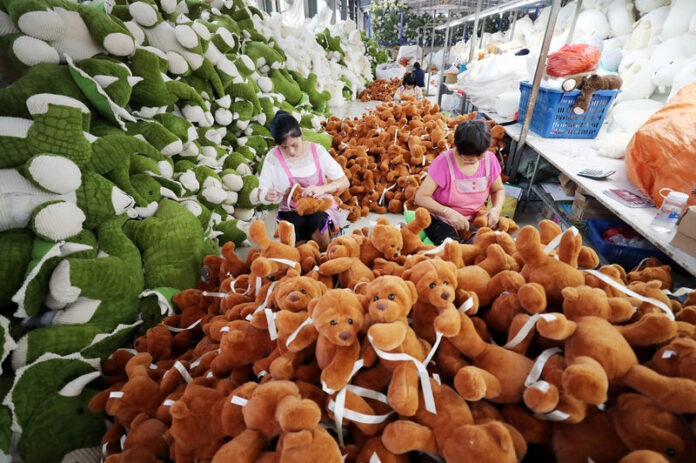 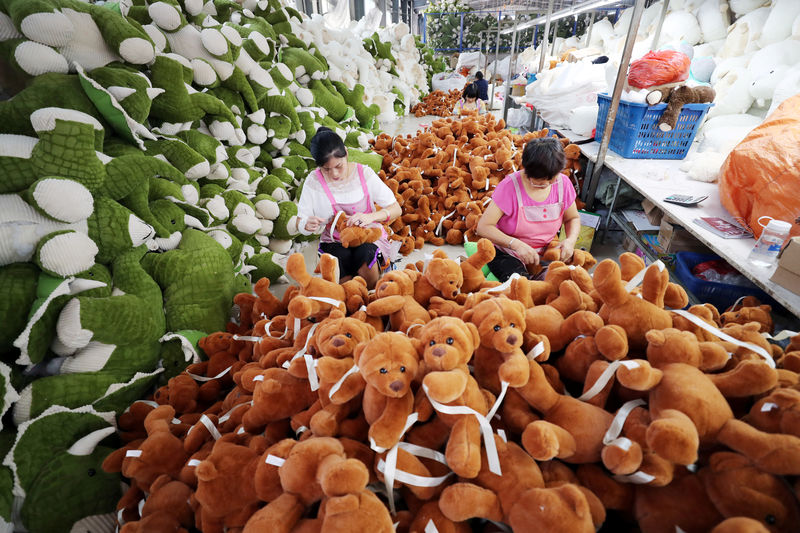 © Reuters. Workers make stuffed toys for export at a factory in Lianyungang, Jiangsu

BEIJING (Reuters) – China’s export growth is expected to have cooled in November, although still in the double digits, as a slowing in global demand offset a months-long rush to ship goods to the United States ahead of a then-expected increase in tariffs.

China’s import growth likely moderated but remained in recent ranges, offering some relief to Chinese policymakers concerned about slackening domestic demand and economic disruptions from the trade row with the United States.

A truce in the trade war might steady the near-term outlook for Asia’s biggest economy, which has been slowing due to a mix of domestic factors including a multi-year campaign to curb corporate debt and risky borrowing practices.

In Argentina last weekend, Presidents Donald Trump and Xi Jinping agreed to a 90-day truce that delayed the planned Jan. 1 U.S. hike of tariffs to 25 percent from 10 percent on $200 billion of Chinese goods while they negotiate a trade deal.

Shipments of Chinese goods on an earlier U.S. tariff list targeting $50 billion of products have already weakened sharply, but that has been offset by a rush of shipments on a later list affecting the $200 billion, according to analysts from Capital Economics.

The prospect of higher U.S. tariff rates from January on Chinese products on the second list has hung over the heads of Chinese exporters for months.

Chinese exports in November likely grew 10 percent from a year earlier, slower than the previous month’s 15.6 percent gain, according to the median estimate of 26 economists in a Reuters poll.

China’s import growth is expected to have eased to 14.5 percent in November from a surprise 21.4 percent jump in October.

According to the poll, China’s overall trade surplus is expected to have held largely steady in November at $34 billion from $34.02 billion the previous month.

The drop in exports and imports growth is “still mild”, and not too much should be read into it, given the volatility, said Lu Ting, chief China economist at Nomura, adding that Chinese shippers were still front-loading goods to U.S. clients.

“But one thing worth noting is that many factories in Guangdong province had suspended operations and put workers on holiday at end-November due to fears of a failure in the Trump-Xi meeting,” Lu said.

The economist also said he expects weakening demand from Japan and Europe contributed to a drop in export growth in November.

With the 90-day truce, a sharp drop-off in outbound shipments in January warned of by most analysts may not materialize, as some of the shipments to the United States may now extend into next year.

In a sign that corporate sentiment is taking a hit from worries over protectionism, manufacturing activity slipped in November in countries as varied as France, Germany, Indonesia and South Korea, private surveys showed this week.

Cooling global demand and domestic headwinds from reduced credit growth and a slower property market look set to cast a bigger shadow on China’s economy in the coming months, even without the drag of additional tariffs, some analysts warn.

Furthering dimming the outlook, scepticism is rising that the 90-day ceasefire is too short for China and the United States to work out a broad agreement over deeply divisive trade and policy issues.

China’s economy will slow further before it bottoms out, even as the immediate threat of higher and broader U.S. tariffs has receded, many economists predict.