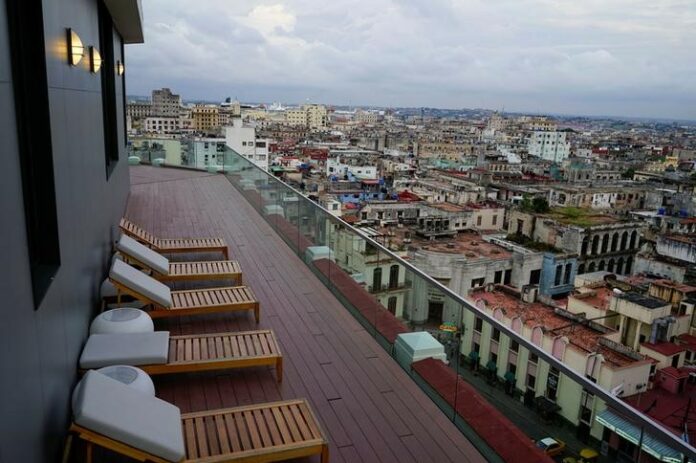 © Reuters. A view of a closed area at the rooftop of a recently renovated Belle Epoque shopping mall housing the Gran Hotel Manzana in the top floors and luxury stores on the ground floor in Havana

By Sarah Marsh and Nelson Acosta

HAVANA (Reuters) – Cuba’s government said on Wednesday it was easing new regulations on the Communist-run island’s fledgling private sector just two days before they are due to go into effect to take into account the concerns of entrepreneurs and experts.

Unease with wealth accumulation and concerns about tax evasion and other illegalities had prompted the government to announce in July tighter controls on the private sector which has flourished in the wake of market reforms eight years ago.

But some of the restrictions announced sparked widespread frustration and criticism among both entrepreneurs and economists – particularly rules limiting Cubans to one business license per person and restaurants to 50 seats.

Labor Minister Margarita Gonzalez Fernandez said in a broadcast roundtable discussion on Wednesday evening that the government had decided to lift those two restrictions.

“I see a ray of light now,” said Camilo Condis, a 33-year old Havana resident who has two business licenses, one to rent a flat and another to work in a restaurant, and dreams of new ventures like opening a cafe.

“I can go back to dreaming now and being creative again, because I now know it will be legal to have more than one enterprise.”

Cubans like Condis with several licenses had fretted for months over which to give up while the owners of private restaurants in Havana that are popular with tourists had said they would have to shrink their operations and fire workers.

Analysts had said the rules would curtail the sector’s growth at a time when the state-dominated economy is already facing significant headwinds, such as reduced aid from key ally Venezuela and lower exports, and could deter foreign investors.

Gonzalez Fernandez said the government had listened to feedback from experts and private sector workers in the meetings authorities had held with them to explain the new rules.

“We received opinions, ideas and experiences that were rigorously evaluated,” Gonzalez Fernandez said. “As a result, we decided to approve the modification of some aspects originally approved.”

Cuban entrepreneurs who had complained that the new rules were drafted without them being consulted said it was significant the government was now listening to them.

“We are confident in collective leadership and the constant link with the people, guaranteeing its participation in the revolutionary tasks and decision-making,” President Miguel Diaz-Canel wrote in a tweet announcing the roundtable discussion.

The government also appears to have backtracked somewhat recently on a law on the cultural sector, which goes into effect on Friday too, after protests from artists. It has said it will revise the accompanying regulations – although not the law itself.

“The take away from this is quite significant as it indicates that popular outcry and mobilization is not futile,” said Cuba expert Ted Henken at Baruch College in New York.

“A concerted effort to push back against what are perceived to be arbitrary, illogical and counterproductive measures can bear real fruit.”