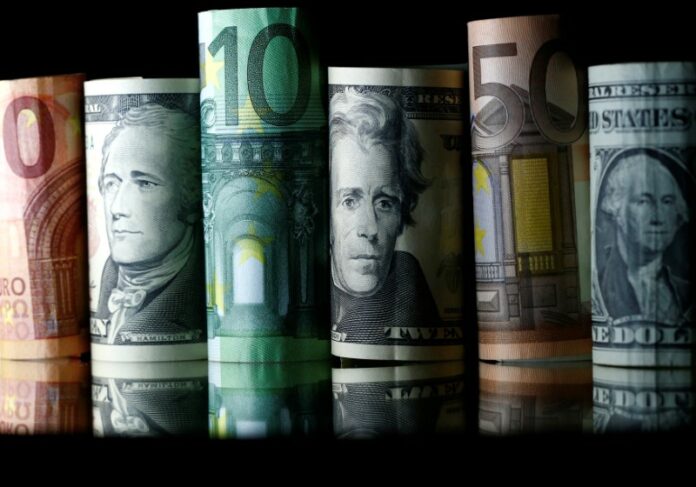 Dollar’s unrivalled surge this year will reverse in 2019 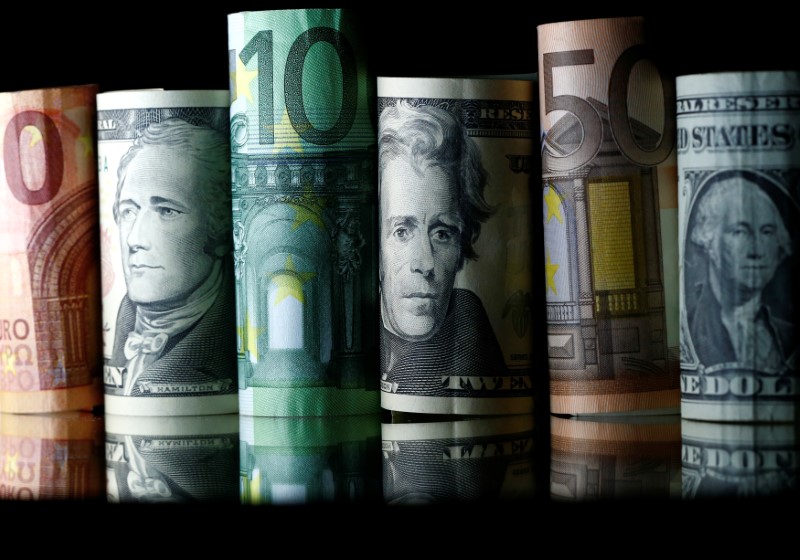 © Reuters. Dollar, Euro and Pound banknotes are seen in this picture illustration

(Reuters) – The dollar, which has enjoyed an unrivalled surge against its peers this year, will be undermined in 2019 on increasing concerns about slowing U.S. economic growth, a Reuters poll of foreign exchange strategists showed.

While the greenback is all set to end 2018 with gains against major currencies after a dismal performance in 2017, the dollar has been under pressure since Federal Reserve Chairman Jerome Powell said last week U.S. interest rates were nearing neutral levels.

In the latest Reuters poll of more than 60 currency analysts, taken Nov. 28-Dec. 5, the dollar was forecast to be weaker against major currencies in a year, leaving the euro () at $1.20, up over 6 percent from around $1.13 on Wednesday.

“FX trends this year have been all about the market making a series of upward revisions to U.S. growth forecasts for 2018-2020, in absolute terms and relative to its main trading partners,” noted Kit Juckes, global head of FX strategy at Societe Generale (PA:).

“The story of 2019 is likely to be a reverse of those upward forecasts, in absolute terms first and relative ones somewhat later. If the initial move is for all growth forecasts to come down, dollar weakness may well be concentrated in the second half of 2019.”

The greenback may also struggle to move much higher, given currency speculators’ bets in favor of the dollar are the highest since December 2016, according to Commodity Futures Trading Commission data.

A flattening of the U.S. Treasury yield curve – a phenomenon in which longer-dated yields fall faster than their shorter-dated counterparts – to just about 13 basis points, its narrowest in over a decade, has fanned fears of a recession in the world’s biggest economy.

An inversion of two-year and 10-year yields, when 10-year bonds yield less than their two-year debt, has preceded almost every U.S. recession in the past 50 years.

Global equities and the dollar have also been hurt by expectations the Fed may be closer to the end of its three-year rate-hike cycle, something economists said was a risk in a separate Reuters poll.

(For a graphic on the risks to Fed 2019 rate hike path from a separate Reuters poll: https://tmsnrt.rs/2QE2shS?eikon=true)

“If the U.S. curve flattening represents more than just an oversized short position in Treasuries, and tells us something about shifting expectations about the future outlook for the U.S. economy, then it isn’t ‘good’ for the dollar,” added Societe Generale’s Juckes.

Still, conviction around the dollar’s march higher has “stayed the same” over the past month, according to slightly more than half the strategists who answered an extra question.

While the remaining were mostly split whether it had “increased” or “decreased”, none of the respondents said they had “no conviction about further dollar strength”.

But the consensus in the latest poll was slightly better for the dollar against most major currencies compared to the previous month’s predictions.

Indeed, the euro was forecast to gain less than what was predicted in November.

But the (), which measures the greenback against a basket of six major currencies, was forecast to close out 2019 at 91.9, down over 5 percent from around 96.9 on Wednesday. That suggests the greenback will reverse and shave off all the gains made this year in 2019.

“We have lifted our USD forecasts on the back of a stronger than expected performance by the U.S. economy and specific factors weighing on other currencies. For instance, the euro has been punished harshly as a result of the deterioration in the political context,” said Roberto Cobo Garcia, FX strategist at BBVA (MC:).

“The fact that we had to raise our dollar projections does not change our scepticism about the long-term strength of the dollar, especially against G5 currencies. Nevertheless, these economies’ domestic contexts will be crucial for the performance of the greenback.”