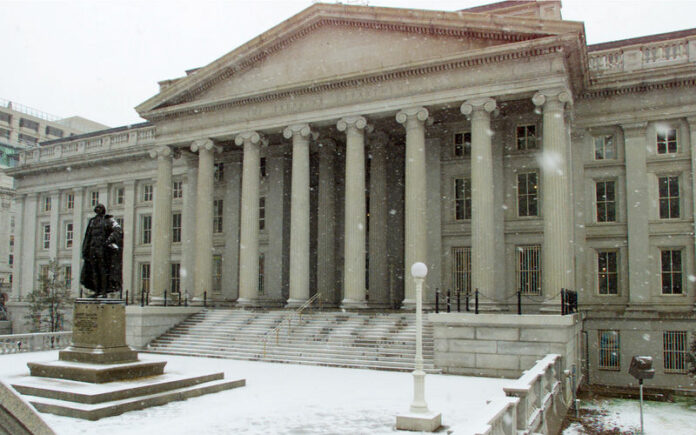 One part of the U.S. yield curve just inverted; what does that mean? 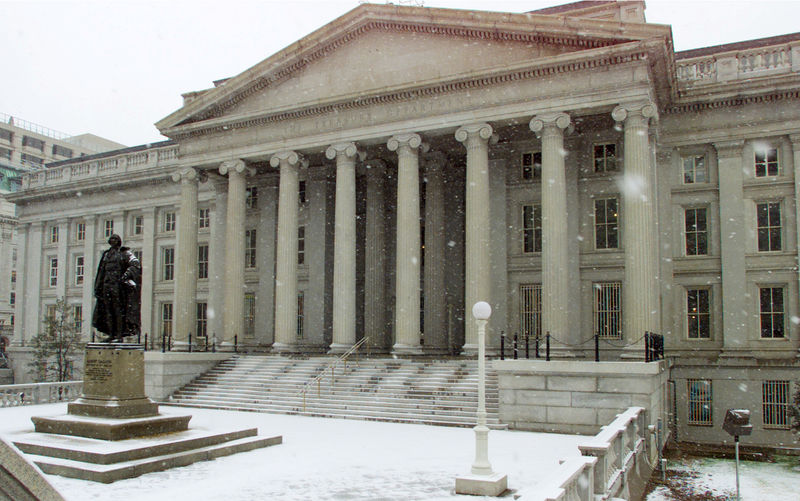 © Reuters. FILE PHOTO: The north side of the U.S. Treasury Building in Washington

NEW YORK (Reuters) – Part of the U.S. Treasury yield curve “inverted” this week, setting off debate over whether it is delivering a classic signal of oncoming recession or it has just developed a short-term kink that can be explained away by technical reasons.

Whatever the reason, investors and economists ignore this message from the bond market at their peril: yield curve inversions – when shorter-dated securities yield more than longer maturities – have preceded every U.S. recession in recent memory by anywhere from 15 months to around two years.

“The yield curve has sent a chill down investors’ spines in regard to the future outlook of the U.S. economy,” said Chad Morganlander, senior portfolio manager at Washington Crossing Advisors in New Jersey. “It’s the what-if scenario.”

To be sure, this week’s inversion has been limited so far to the front-end of the yield curve rather than more closely studied recession harbingers such as the gap between 2-year and 10-year note yields. In the current instance, yields on 5-year notes () have dropped below those on both 2-year () and 3-year () securities.

Still, in December 2005, for instance, a comparable inversion at the front of the curve was followed shortly afterward by an inversion between 2- and 10-year yields. The Great Recession began in December 2007.

That pattern was also evident in late 1988 in advance of the 1990 recession. Ahead of the 2001 recession, the entire curve dropped into inversion in sync in February 2000.

In the current instance, investors and economists are debating whether this warns of economic weakness ahead or if it reflects other factors, such as a recent reversal of large speculative bets on declining bond prices and the Federal Reserve’s large holdings of Treasuries.

A central focus is whether it means the market is second guessing the Fed, which has been raising interest rates for three years and is expected to lift them further, including at their next meeting in two weeks.

Jeffrey Gundlach, chief executive officer of DoubleLine Capital and a closely watched bond investor, comes down on the side of it being a fundamental signal. It reflects “total bond market disbelief in the Federal Reserve’s prior plans to raise rates through 2019,” he told Reuters.

At the same time, this week’s move does coincide with an ongoing positioning shift in the Treasury market.

Hedge funds and other speculators had amassed a record level of bets on declines in Treasury prices through the futures market, with the heaviest bets lodged against 5-year maturities. But they have slashed those by more than half in the last few weeks, and that may have contributed to the out-sized rally in 5-year note prices in particular. Bond prices and yields move in opposite directions.

“A lot of it is momentum,” said John Canavan, market strategist with Stone & McCarthy Research Associates in New York. “I do think it’s overdone with short-covering and unwinding of money-losing positions.”

Another current factor that was absent in previous inversion episodes is the Fed’s $3.92 trillion stockpile of bonds accumulated to soften the effects of the 2008 financial crisis. While it has been shrinking its holdings for more than a year, its bond portfolio remains the world’s largest and is seen as a force in suppressing longer-dated yields.

Those potential explanations aside, the U.S. economy is in the middle of its second-longest expansion on record, and economists and investors are mindful that a downturn is inevitable.

Some business sectors like auto and housing are flagging due partly to rising interest rates, while debt-laden companies have raised concerns whether they could keep up with their debt payments as borrowing costs are rising.

Fed officials have cited these developments that bear watching, but several of them have repeatedly cautioned about the inversion of yield curve as the most reliable indicator that a recession is on the horizon.

Some traders said the dramatic curve flattening may be overdone and may revert if the government’s November payrolls report out on Friday were to show solid jobs and wage growth.

While the risk of the entire yield curve inverting grows in anticipation of slower domestic growth, the economy appears on sure footing due to a solid job market and mild inflation.

And, even if the latest kink in the yield curve is indeed the first signal of a downturn as many suspect, it does not indicate when it will actually begin nor how severe it will be.

“It’s a sloppy predictor because at some point after yield curve inversion you could get a recession that could be one year, two year, three years,” said Nicholas Colas, co-founder at DataTrek Research in New York. “And as far as what it means to markets, you could still have another very solid year after inversion.”