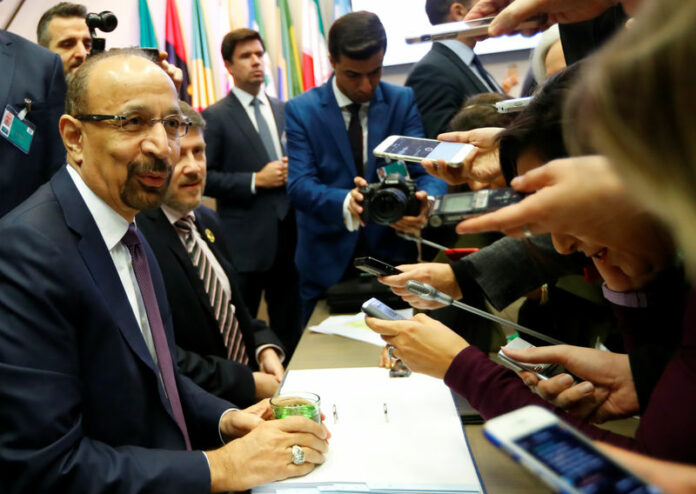 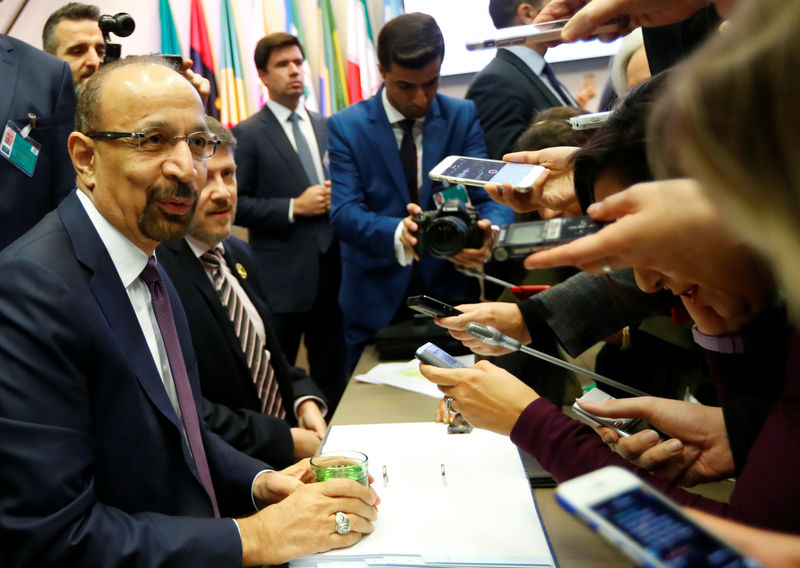 © Reuters. Saudi Arabia’s Oil Minister al-Falih talks to journalists at the beginning of an OPEC meeting in Vienna

VIENNA (Reuters) – OPEC tentatively agreed an oil-output cut on Thursday but was waiting to hear from non-OPEC heavyweight Russia before deciding the exact volumes for a production reduction aimed at propping up crude prices, two sources from the group said.

Russian Energy Minister Alexander Novak flew home from Vienna earlier for talks with President Vladimir Putin in St Petersburg. Novak returns to the Austrian capital on Friday for discussions among Saudi-led OPEC and the group’s allies.

The price of crude has fallen almost a third since October but U.S. President Donald Trump has demanded the Organization of the Petroleum Exporting Countries make oil even cheaper by refraining from output cuts.

“We hope to conclude something by the end of the day tomorrow … We have to get the non-OPEC countries on board,” Saudi Energy Minister Khalid al-Falih told reporters before the OPEC meeting started.

“If everybody is not willing to join and contribute equally, we will wait until they are.”

Asked whether OPEC could fail to reach a deal, Falih said all options were on the table. Possible output cuts by OPEC and its allies ranged from 0.5-1.5 million bpd, and 1 million bpd was acceptable, he said.

OPEC’s closed-door meeting began around 1100 GMT and was still ongoing after 2-1/2 hours.

Brent oil futures () fell as much as 5 percent to below $59 per barrel on fears that there could be no deal but later recovered somewhat, trading down 2 percent by 1325 GMT. [O/R]

“One million bpd may disappoint many. But should the cut be from a September or October baseline, rather than November, the net impact would be sufficient to limit storage builds,” Greg Sharenow, executive vice-president for Pimco, said on the sidelines of the OPEC meeting.

“It is unlikely to spark a meaningful price rally, but also will not be so dire either. In many respects it is the middle road, which may be the optimal solution,” said Sharenow, who helps manage a $15 billion commodities fund at the $1.77 trillion U.S. investment management firm.

Novak said on Thursday that Russia would find it harder to cut oil output in winter than other producers because of the cold weather.

Graphic: Who might agree to an OPEC crude supply deal? https://tmsnrt.rs/2Ru61od

Graphic: OPEC’s battle to coax Russia to cut oil output as the US ramps up – https://tmsnrt.rs/2RzCE3J

Russia, Saudi Arabia and the United States have been vying for the position of top crude producer in recent years. The United States is not part of any output-limiting initiative due to its anti-trust legislation and fragmented oil industry.

Iranian exports have plummeted after the United States imposed fresh sanctions on Tehran in November. But Washington gave sanctions waivers to some buyers of Iranian crude, further raising fears of an oil glut next year.

“Hopefully OPEC will be keeping oil flows as is, not restricted. The world does not want to see, or need, higher oil prices!” Trump wrote in a tweet on Wednesday.